The 2011 film Dogani, also known internationally as Silenced, is based on a true story that was brought to light in Gong Ji Young's 2009 novel, The Crucible. In fact, Gong Ji Young first published the story on the internet portal, Daum, in 2008 and left it up for six months. Her goal was to let everyone know about the sexual violence against students that happened at Inhwa School for the hearing impaired in Gwangju from 2000-2005.

While Gong Yoo was still in the army, he was given a copy of The Crucible as a gift. He contacted the director of his agency to talk about the possibility of it being made into a movie. He was able to meet with author Gong Ji Young, who also wanted the movie to be made in order to reach a larger audience. Like-minded director Hwang Dong Hyuk's goal was to reveal the appalling crimes, the corruption between police and rich families, and the negligence of civil servants, in order to make people aware of the structural problems of society. With a team of people fueled by compassion and outrage, who believed in justice and social change, the movie was able to deliver its message to millions and have an affect in society as well.

The tone of this dark drama is set as the headlights of a car shine on a misty mountain road. It's a lonely path in a lonely place, and the one who shines the light is solitary, but also a beacon of hope.

Something is very wrong in the city of Mujin, and it is apparent right from the start as a young child takes matters into his own hands. 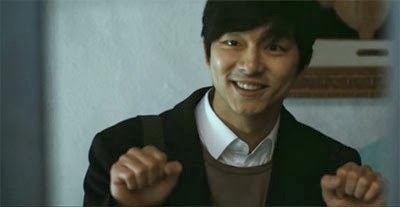 Gong Yoo plays Kang In Ho, an art teacher newly appointed to a school for the hearing impaired. He greets the kids using sign language and immediately notices how withdrawn they are.

The film wastes no time in getting to the heart of the matter. Kang In Ho soon discovers the beatings and sexual abuse that the children have been subjected to and helps to make it public in order to force a police investigation.

The images are disturbing; director Hwang Dong Hyuk uses sound effects and editing to make the audience uncomfortable enough to realize the horrific nature of these crimes. It's a necessary process, because these atrocities really happened, and are happening today in society all around us, unseen.

While struggling with financial and personal problems, Kang In Ho faces a system where might makes right, and money talks. To take a stance that he can ill afford is a very real issue. It is a crossroads similar to which many people find themselves sometime in their life, and therefore quite relatable. "What would you do?" the film seems to ask.

The most poignant scenes involved Baek Seung Hwan who played Min Soo. Just 13 at the time, he delivered a tortured and heartbreaking performance, using the sounds and gestures of a deaf child, communicating volumes on the screen.

Kang In Ho, along with human rights worker Seo Yoo Jin, played by Jung Yu Mi, give the victimized children support throughout the trial. At one point, he shares his favorite quote with Yeon Doo. "The best and most beautiful things in the world cannot be seen or even touched, they must be felt with the heart." ~Helen Keller. 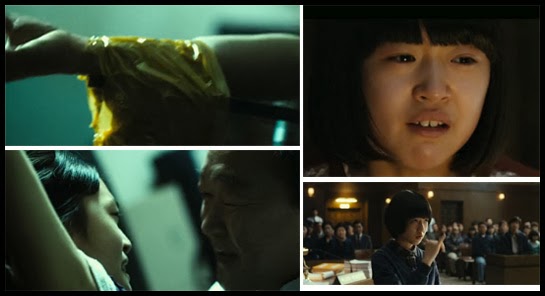 Part of the trauma of the courtroom scenes were of the children recounting their horrific experiences. Kim Hyun Soo played Yeon Doo and Jung In Seo as Yoo Ri, were in turns brave, calm, hurt and solemn.

The other part of the traumatic courtroom action was the complete denial and lack of remorse on the part of the defendants. Added to that, their unethical attorney who, as a matter of course, was to receive favorable judgement just because it was his first case after retiring as a judge. A custom like this being held above the merits of a case, and perpetuated into modern times is beyond injustice and it was important to spotlight it in the film.

Gong Yoo's powerful performance did not overshadow the important issues of the film. He served as a vehicle to deliver the message to the audience on an emotional level. Let's not look away, let's make positive changes instead.

The film is not all darkness and despair, though. There is hope in the resilience of children, in the goodness of nameless volunteers, in those who try to make society a better place. One of the most misunderstood quotes of the movie is when Seo Yoo Jin says, "Watching them grow so well it makes me think that we should not fight to change the world itself, but to stop it from changing us."

People have taken it to mean that she's saying we shouldn't try to make the world a better place, and that's not the message at all. When individuals think about the daunting task of trying to change the world, it seems so hopeless, it's discouraging and very few would even try. But to stop the world from changing us is within our grasp and really of the utmost importance. It is the strength of the individual that truly changes the world; by our daily choices, our votes, where we spend our dollars, where we raise our voices. Keeping true to ourselves; not becoming corrupt, weak, unethical people, will strengthen society and empower us to affect changes outside of ourselves.

Although I haven't read the original novel, after reading articles about the actual events that inspired it, I feel that the movie gave an accurate enough portrayal that brought pertinent issues to the audience in an effective way. While stories of this sort flash on the news all the time, a venue such as a movie can really deliver the message in more detail and on an emotional level that will resound with the masses.

After the movie evoked public outrage, the case was re-investigated and Inhwa School was closed. The Dogani Bill was passed which abolishes the statute of limitations for sex crimes against minors and the disabled. It was later revised to impose harsher punishment on sex offenders. The following year, Administrative Director Kim who had previously been exonerated for lack of evidence, was sentenced to 12 years imprisonment.

Director Hwang said in a newspaper interview, "I took up filmmaking because I was so frustrated by all these unresolved social issues I saw.  We can see through films how much we are changed by the world. You can't change society with just one movie, but looking at the repercussion of the release of this film, we can think about the power film has in terms of positively affecting society."

Though the film did bring about some justice, there has been no mention of any policies adopted to support the victims.  Park Chang Dong, chief of the Special Committee of Gwangju Inhwa School Sexual Violence, has stated that even six years after the incident, the school hasn't kept its promise to compensate or offer counseling to the victims.

After the initial post-film outrage set change in motion, public attention waned before comprehensive policies could be realized. Hopefully the entertainment industry can provide more prompts for the public to become vigilant and see things through the aftermath of such incidents until lasting change can be made in more aspects of social issues.
Posted by Panda at 1:19 AM