First Impressions:// The Painter of the Wind

The Painter of the Wind drops us right into a story with engaging characters, intrigue, conflict and best of all, chemistry!  The setting is 1777 at the start of King Jeong Jo's rule.  He was known as an innovative king who made many reforms and led Joseon into a renaissance period.  The drama is based on the fictional novel, Painter of the Wind, by Lee Jeong Myeong, which portrayed Hyewon as a woman in disguise.

The artist in me loves the fact that the story revolves around two renowned painters of the Joseon period. Kim Hong Do (pen name, Danwon) painted daily life which gives his work historical as well as aesthetic value. Shin Yoon Bok (pen name, Hyewon) was actually a man who was influenced by Kim Hong Do. However, he developed his own style which went beyond convention, though at the time he was not acclaimed due to the sensuality of his paintings at a point in history which was ruled by a strict Confucian moral code.


So today I get my YouTube emails and I got to say that I was super excited to see that BIGBANG's YouTube account uploaded G-Dragon's "Go" ("MichiGo") video. This video has appearances by Se7en, Teddy and Taeyang and these guys are always a pleasure to see. "Go" is fun filled video (of course it is Silly, that's expected of GD.) and has this adorable man sporting some crazy hairstyles from a clean cut black mop-top closely reminiscent to his Heartbreaker days, a black afro, mo-hawk and a very cute half brown half black natural curl look.

My comments: At first scene I thought GD had some extra huge feet. :) I like pink and elephants so the mascot head was cool with me. His look with the natural curls and glasses was my favorite among them, and the innocent look really fits him. Too cute. (Though the spanking scene left me to wander a bit and if I am not mistaken there is a line that says "Nan Dessert"...yes GD, I'm sure you are...or maybe I am hearing things. I think its more along the lines of him having dessert, as in a female, not him being dessert but I can dream.)

I would love to be on set with these guys, they always seem to have so much fun and be so energetic. The song itself is an upbeat party song that will leave you wanting to dance.

This was not one of the dramas on my "Must See" list.  It's a remake of the 2002 dark Japanese melodrama, Ai Nante Irane Yo, Natsu, and was previously remade as a movie called Love Me Not starring Kim Joo Hyuk and Moon Geun Young in 2006.  I watched the movie and was traumatized by it, which means that it was touching and effective.  So I did not want to put myself through a 16 episode emotional wringer, even though it has a great cast.  And although he's not the male lead, Kim Bum is part of it;  be still my fangirl heart! 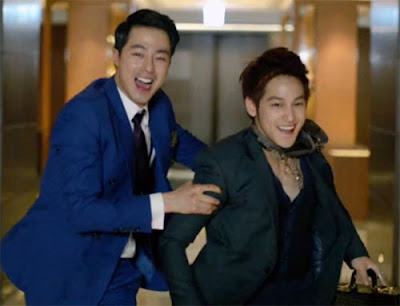 I'm currently deep into a drama that I had waited for with great anticipation and thoroughly enjoyed until that darned overused plot element started looming.  I know it's going to take over the next episode so I've been avoiding it.  But I also know that I can't just not finish the drama, so I'm going to have to grit my teeth and bear it.

It happens in too many dramas.  One half of the couple (usually the female) is convinced by other people that they must break up for the benefit of the other person.  Yes, because it's much less hurtful to be dumped, often for someone else, than lose out on a career opportunity or cause waves in a family.  Don't be honest and work out the problem together, lie and manipulate and break the other person's heart for their own good!

Honestly, I'm extra perturbed about this particular plot element because I would probably do something stupid like this in the past, thinking that I'm somehow protecting the other person.  Whenever this tactic is used, invariably everything is revealed in the story so that true love can bloom once more.  If I were the heartbroken person, however, I don't think I would ever feel the same again.  The magic would be diminished, and so would the trust.  You can understand good intentions, but the heart can't go back.