First Impressions:// The Painter of the Wind

The Painter of the Wind drops us right into a story with engaging characters, intrigue, conflict and best of all, chemistry!  The setting is 1777 at the start of King Jeong Jo's rule.  He was known as an innovative king who made many reforms and led Joseon into a renaissance period.  The drama is based on the fictional novel, Painter of the Wind, by Lee Jeong Myeong, which portrayed Hyewon as a woman in disguise.

The artist in me loves the fact that the story revolves around two renowned painters of the Joseon period. Kim Hong Do (pen name, Danwon) painted daily life which gives his work historical as well as aesthetic value. Shin Yoon Bok (pen name, Hyewon) was actually a man who was influenced by Kim Hong Do. However, he developed his own style which went beyond convention, though at the time he was not acclaimed due to the sensuality of his paintings at a point in history which was ruled by a strict Confucian moral code.

Moon Geun Young is a very plausible gender bender.  She plays the masculine role with subtlety and her usual pre-2010 charm and expressiveness. 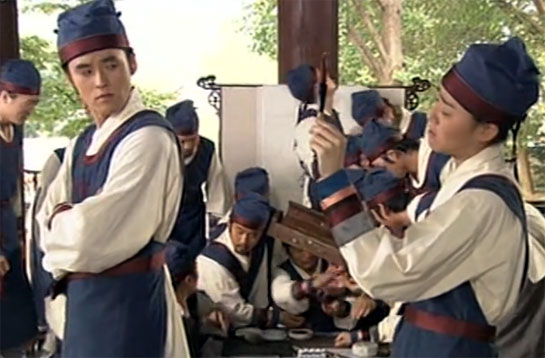 Nothing like a good rivalry to kick things off.

No gender bender would be complete (in my opinion) without the poor guy who is left questioning his sexuality in light of his bewildering attraction to the disguised person of interest: 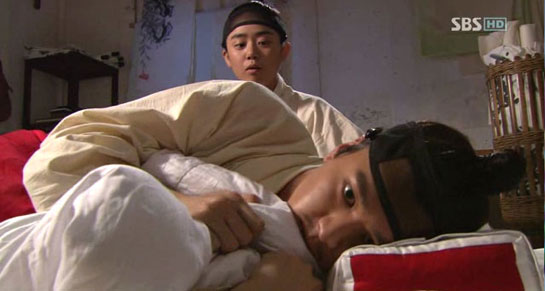 There is political intrigue which I'm looking forward to seeing unravel, even more so because Ryu Seung Ryong is involved.  The serious issues are nicely balanced with comedy, and in this episode, a really adorable tiger:

I wasn't sure if there would be chemistry between Moon Geun Young and Park Shin Yang since he is 19 years her senior, and let's face it, she seems little-girlish to begin with.  However, I needn't have worried as they play off of each other in an effortless and entertaining way.:

The supporting cast is full of welcome familiar faces, historical paintings are showcased, the sets are beautiful, and our hero is already in imminent danger.  I'd say this series is starting off in the best of ways.
Posted by Panda at 5:32 PM