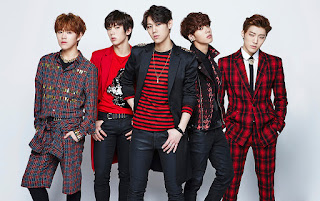 Star Empire, home to ZE:A (which if I am not mistaken aren't even together at the moment, with members in the military at the time of this post.) and Nine Muses, has brought us a new batch of boys to possibly wreck some bias lists. A series of Youtube videos have been uploaded to help introduce the boys to all of us fangirls and fanboys alike. Members lines range from 93' to 98'. I feel that the intro videos for each member does well in displaying what each person brings to the table. My only hope is that they debut with the same amount of appeal or more.

They just released their debut single "Lollipop", an upbeat tune that you can't help but dance to.

Kill Me, Heal Me is a 20-episode medical mystery/romantic comedy about a chaebol son with multiple personalities who gets treated by a first year psychiatry resident. Cha Do Hyun (Ji Sung) loses a year of his childhood memories after traumatic events splinter his mind into several identities. Because of his position, his condition cannot be revealed, and strangely enough, he's only responsive to Oh Ri Jin (Hwang Jung Eum), a psychiatrist with no experience with Dissociative Identity Disorder. Meanwhile, her twin brother Oh Ri Ohn (Park Seo Joon), is a mystery writer digging into Cha Do Hyun's history, but it seems he already holds a big secret.

The Good:  Ji Sung gave a brilliant performance, assigning different facial expressions, voices and body language for each personality. He inspired empathy for each, and sold every scene he was in as believable, touching and entertaining.

Although the chemistry between the leads was a bit lacking at first, it warmed up in the second half and improved through to the end.  Cha Do Hyun and Oh Ri Ohn's "bromance" was spectacular and worth watching over and over.

Oh Ri Jin and Oh Ri Ohn have a warm and funny sibling relationship, though there is a sad and poignant side to it that adds another layer of emotion to the overall story.

The action and intrigue unfolded in an interesting and well-paced manner. Though somewhat predictable, the storytelling still created a sense of curiosity as to how it would all be revealed and resolved.

The Bad:  There didn't seem to be much research done for the medical aspect of the drama. It was more a romantic comedy with a medical theme, since psychology didn't play a part in the actual handling or treatment of Cha Do Hyun's condition. And although I didn't expect it to be very realistic, the resolutions that came about completely devoid of psychological input were not satisfying, and I was left feeling like all the loose ends were not tied up.

Oh Ji Rin was completely unbelievable as a psychiatrist. She was extremely annoying for the first ten episodes with her histrionic shrieking and the disingenuous, condescending tone she took at times. She was too clueless and easily flustered to have the mind or training of a psychiatrist, and it pulled me out of the story for more than half of the episodes which was a big disappointment.

Despite that, there was a lot of emotion built up in the story which ignited expectations for a ending that was at least as engaging as one of the many endearing scenes. Though many viewers might be satisfied with the conclusion, it was just lukewarm for me. After laughing and crying with these characters for 20 hours, I expected an ending with a little more intensity.

Interesting Notes:  Ji Sung and Hwang Jung Eum played opposite each other in the 2013 suspenseful crime melodrama, Secret Love.  Hwang Jung Eum and Park Seo Joon went on to star together in She Was Pretty which aired later in 2015.

Email ThisBlogThis!Share to TwitterShare to FacebookShare to Pinterest
Labels: Birthday

Don't let the cuteness fool you.


In this colorful video, GIRIBOY is a man who is in love with a rotten girl. It tells a tale of a man who is being...
"sucked dry"

...when the girl that he loves is using him whenever she needs something. The video and lyrics go well in a quirky and cutesy display of someone who has turned into a "sucker for love". GIRIBOY tells the story so vividly and it's only right to have a video that can convey it visually as well.

The tempo is pretty mellow and allows for relaxed listen. The colors, while vibrant, are not overbearing. It sounds like a feel good song but the lyrics kindda speak otherwise.

Kim Min Ho (So Ji Sub) is a rich chaebol son who has been moonlighting as a physical trainer in the United States. He meets Kang Joo Eun (Shin Min Ah) on the way back to Korea, and his life becomes entangled with the overweight, former beauty. Though she has physical problems, and Min Ho has emotional scars from a traumatic childhood, they each have strengths that the other needs to heal.

The Good:  This drama contained a veritable laundry list of every cute thing a drama should have. The leads gave amazing performances, watching So Ji Sub be shocked and cute and frustrated was the ultimate fangirl dream, there was a trademark kiss, sexy workouts, an adorable three-way bromance, a cute chubby kid, the stern but caring assistant, the stereotypical date full of cute activities, warmth and fuzziness, and a handmade gift (of course). Even the soundtrack is cute and upbeat.

Though the plot basically revolved around a fat girl getting skinny and reclaiming a happy life, it was nice that health over appearance was stressed. More important than Min Ah looking better, were the results of her blood test and physical examination. Min Ho repeatedly tells her that good health is pretty and sexy. The drama also conveys that becoming thin and beautiful doesn't automatically bring happiness.

Jang Joon Sung (Sung Hoon) and Kim Ji Woong (Henry) gave endearing bromantical performances as the MMA fighter and manager working with Min Ho. They were such a pleasure to watch, I want them to have their own spin-off drama. Though Joon Sung did have a sub-plot, more time could have been spent on it, in addition to further developing Ji Woong's character. Though they weren't cultivated to their fullest potential, the fact that they were so lovable as to make me want more of them is still a good thing.

Oh My Venus was captivating enough to be marathon worthy up to episode 14, with anticipation for the problems that would arise in the home stretch. Although they dropped the ball in the last three episodes, in my opinion, the final scene was so perfect, it made up for it.

The Bad:  Some might like a feel-good drama from start to finish. I prefer to have a decent amount of pain and strife to maximize the impact of the sweet scenes. There was lots of potential for conflict to be developed, but it was all diluted, and negative situations were quickly cleared up. The biggest obstacles they faced were themselves, and because it was all their own choice, there was no question that everything would be resolved .

Im Woo Shik (Jung Gyeo Woon) and Oh Soo Jin (Yoo In Young) represented one of the main sources of conflict in the drama, but their relationship with each other was portrayed as a bit depressing to the point where you have to wonder if there was ever any spark between them. It was sorely underdeveloped to begin with, which made them difficult to relate to as the drama progressed.

The last three episodes started to drag with continued happiness and lots of flashbacks. Where the story could have had more tension and meaning (and attention to the side characters) all the way to the end, it was filled with slow paced feel good moments. There were about a dozen scenes that could have been the happy ending. Despite my love for all the characters, I was ready to rate this drama a seven, until that final perfect scene bumped it back up to an eight. With better writing, it could have been a ten.

Oh My Venus received an average Neilsen rating of 8.7% nationwide, and 9.5% in Seoul. Yoo In Young received a Popularity Award at the 2015 APAN Star Awards. So Ji Sub won for Best Actor at the 2015 KBS Drama Awards, where Shin Min Ah won for Excellent Actress in a mini-series, and together they received the Best Couple award.