The Latest Leads of Boys Before Friends.

I've learned my lesson. When referring to the American adaptation of Boys Over Flowers, never say "final" when it comes to casting because you just never know how long these people are going to be around. I don't know if I should even update our comprehensive adaptations poster - again. We'll see what happens. 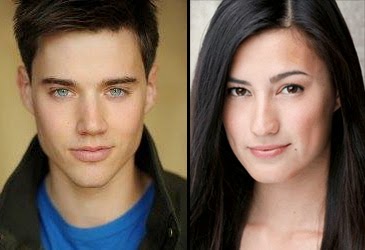 Meet Kevin Markovic and Rose Guess, the new Liam and latest Zoey. There is just a chance that they will stay for the duration since neither has the level of resume that Joseph Almani and Dawn Morrow sport, so it stands to reason that they probably aren't represented by management companies that will look after them either.
Kevin Markovic is credited with being in an eight minute short from 2011 entitled The Missed Call where he plays a wild college student. Other than that, there is no portfolio, professional biography or demo reel available for him.
Rose Guess is a 24 year old Portland native who moved to Los Angeles and has done some modeling. Her one film credit is for a 60 minute 2012 film called Hollywood a GoGo - The Ultimate Dance Party. The clip on IMDb made me cringe, but just at the production quality, I couldn't tell which body was Rose's.
Inexperience and desperation definitely have a place in Hollywood, because without them, countless productions would not have been born; Boys Before Friends, obviously one of them. Hopefully things go smoothly for the series now. If anything, the next change they should make is replacing their writer/director. That would go a long way in improving the quality of the show.
Posted by Panda at 5:42 PM