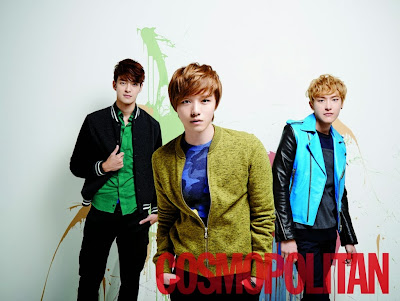 Ah, my newest addiction. A band by the name of Royal Pirates. I came about the video for 'Draw the Line' (Band Version MV) but didn't have much interest in it, at least until I saw a pretty face frozen on the frame with the play button screaming at me to press it and watch. So, I did.

The band, Fading From Dawn, was formed in 2004. It consisted of brothers Kim Moon Chan (Richard) and Moon Chul (Andrew), along with drummer Soo Yoon. In an untimely and tragic car accident, Richard along with two friends died in April 2008. Without Richard, Moon Chul and Soo Yoon rarely played events. It wasn't until 2009 that James, their current bassist, joined the band. They would continue to perform as Royal Pirates. It could no longer be Fading From Dawn without Richard, so they changed their name.

Why the name Royal Pirates? Well the boys were tossing around random words for a new band names. It's a mix of high class royalty and bad ass pirate freedom, the best of both worlds.

The band received a lot of love on YouTube for doing various covers from Muse, Britney Spears, SNSD, and Wondergirls, to name a few. My favorite cover is their rendition of Super Junior's 'Sorry Sorry'. I've been listening to it on repeat since I discovered it yesterday. LOVE IT. Besides, I have a thing for bands, NELL, CN Blue, FT Island, LEDApple...the list continues.


After looking up some more stuff by Royal Pirates, I realized that I knew about it when they released their digital album 'Shout Out' in 2013, and thought they were pretty cool then. I like their older stuff though, like 'Disappear'. Their newer stuff has an easy going feel to it. Of the new album, Drawing the Lines, my favorite song is 'See what I See'. There's just something about Moon Chul's voice that gives me chills... The good kind... Like down my neck. *cough* Anyways, I'm following the boys on twitter and can hopefully keep up with what's going on with the rest of the boys. Maybe they will be in NY sometime soon. If you are reading this, let me interview you guys, eh? *bats eyelashes*

You can find out more info on the band at their official website: www.royal-pirates.com and on the fan-site www.theroyalvoyage.com
Posted by Batzy at 12:38 AM

Email ThisBlogThis!Share to TwitterShare to FacebookShare to Pinterest
Labels: Disappear, Drawing the lines, Fading From Dawn, Fly to you., James, Moon Chul, Moonchul, News, Royal Pirates, See What I See, Soo Yoon, You