Waiting for Sukkie in Beautiful Man

Ever since I learned that Jang Geun Suk would be starring in the new drama Beautiful Man (Yebbeun Namja) I've been in a tizzy.  The drama is based on the manhwa of the same name by Chon Kye Young. You might look at it and think that we've seen Jang Geun Suk in this role before, but he does it so well!  The arrogant, misguided, cold man whose heart must be melted by a goofy (and probably clumsy) leading lady. It's one of my favorite scenarios, especially when Sukkie is involved.

Dokgo Ma Te (*29) is the most beautiful man in the world.  He's also very ambitious; longing for power, status and wealth, and he's going to use his natural assets to his advantage.  Hong Nya Nya (39), the ex-daughter-in-law of a rich family becomes his mentor and instructs Dokgo Ma Te to seduce ten successful women who all have a different skill set that he should learn.  The women range in age from 18 to 50. Thinking about the casting for this boggles the mind

First, let's introduce our second leading man who will vie for the attentions of our leading lady, and most likely get his heart smashed to bits.  Lee Jang Woo will be playing David Choi, an unconventional free spirit who will go up against Dokgo Ma Te in the game of love.  He played a cold-hearted, but vulnerable jerk in Man of Honor.  Then he was super adorable in I Do, I Do.  I can't wait to see what he does in this role. 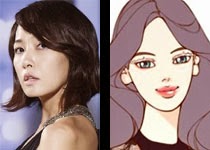 My pick for the role of Hong Nya Nya is Kim Sun Ah.  She starred opposite Lee Jang Woo in I Do, I Do and although they probably wouldn't have much interaction in Beautiful Man, it would be nice to see them in the same drama.  Plus, she's a powerhouse and would be awesome in the role.  Too bad she's busy promoting her film, The Five.

But the big question is, who will play the part of Kim Bo Tong (25), an ordinary girl with a poor background who falls in love with Dokgo Ma Te?  It's up to her to show him that love is more important than ambition. 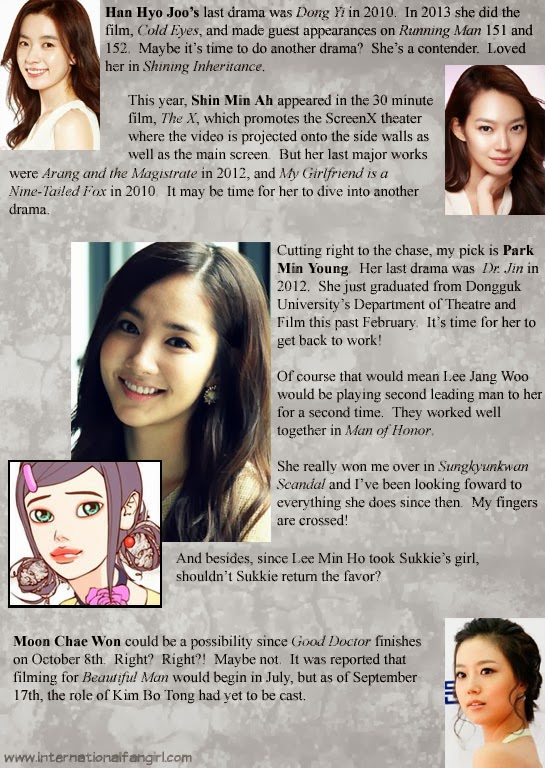 As a point of interest, scriptwriter Yoo Young Ah also wrote the 2013 film No Breathing coming out on Halloween.  Good things happening this fall!

* The ages provided are those indicated on the Korean Wikipedia page and may have no bearing on the drama.
Posted by Panda at 7:53 PM