The rocker turned cabin attendant trainee, Misaki, has had a serious wake up call and is now at a turning point in her life.  She received a huge blow at the end of episode 7 that could crush her spirit.  It's hard to believe that anything could keep her down for long, though, and so we dive into episode 8 confident that she will prevail against all hardships.

Instructor Mikami tells Misaki that she will need to continue training at the training center until she's qualified for OJT.  Her first assignment is to write a report on what she needs to do from now on.

Misaki feigns optimism in the face of being held back.  She tells the class she just needs a few more days of training.  While asking Wakamura and Sekiyama where they want to go for drinks, Nakahara sees them.  Misaki quickly tells him that they all passed and he assumes that they are going to the zoo as a group.  Wakamura is flustered because he had misunderstood her invitation. Misaki steps in and decides the day and time, then assigns Wakamura to make the lunch.

As they walk away, Misaki tells Wakamura that she and Sekiyama will get stomachaches that day and not show up, so she should have a nice time with Nakahara.  Wakamura asks Misaki why she lied to him, but Misaki brushes it off and says she'll be going to OJT soon anyway.

Off to karaoke they go.  Wakamura sings modern J-pop song, Kabutomushi by Aiko.

Misaki and Wakamura are astounded when Sekiyama sings Lum's Love Song from the 1981 anime, Urusei Yatsura.

Misaki sings Muhoumatsu no Isssei by Hideo Murata.  Traditional enka was the last thing her friends expected to hear from Misaki, the former rocker.

While the rest of the class goes off to OJT, Misaki trains alone in the classroom.  Mikami looks over her report and asks her to rewrite it.  Then she starts with the lesson on bowing, just as the first day of training began.  Misaki points out that she's already learned it, but Mikami tells her to learn it again. 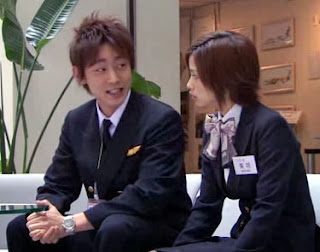 Tsutsumi sees Misaki in the lobby and tells her that he always felt they had something in common. She hadn't progressed to OJT and he can't seem to get past his Status Review Exam.  He tells her to cheer up and Misaki thinks that she must have hit rock bottom to have to be cheered up by Tsutsumi. 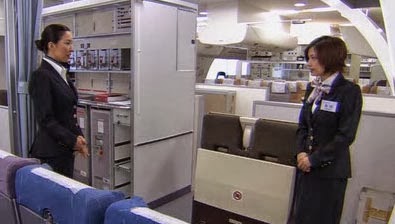 Back in the model cabin, Mikami has Misaki repeat herself over and over.  Misaki asks her how much longer she'll have to stay on the ground.  Mikami tells her it could be days or weeks, or she may never go on to OJT because she will not send an unprepared cabin attendant into the sky.

In the locker room, Misaki's classmates are talking about how hard their on the job training has been. Misaki goes in energetically to cheer them up. 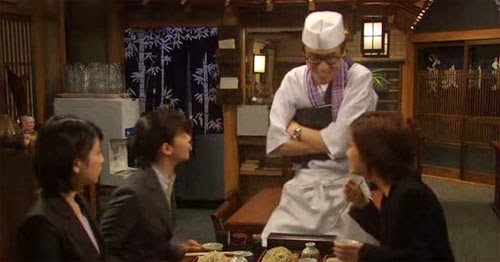 Later at the soba shop, Wakamura tells Misaki that she doesn't have to try so hard to hide that she's feeling down.  Misaki keeps up her act and jokes around with Wakamura's father who tells her that she's such a man and can have Wakamura for her bride.  That night she struggles to rewrite her report.

The next day, Mikami goes into the office for a key, and Instructor Kinoshita tells her that it's too bad; she had done well on the test, but Instructor Mikami felt that she wasn't ready to advance yet. Misaki asks if it was Mikami who failed her and Director Dazai comes over and assures her that it was a joint decision.

Asou and Murayama see Misaki in the lounge and tell her that there's a rumor Misaki is going to be cut.  Mikami had had to deal with a troublemaker in the past and she probably doesn't want to put another one into the sky.  Supposedly it was because of that girl that Mikami gave up her wings, and so she's probably just waiting for Misaki to quit. 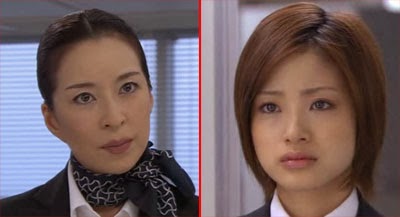 Misaki loses her energy as she repeats her training.  Seeing Wakamura and Sekiyama returning from a flight doesn't help.  She confronts Mikami and asks if she's the one who failed her.  Mikami confirms it.  Misaki asks if she really gave up her wings because of that kouhai (junior) who she reminds her of, and if this is really training or is Mikami having her repeat everything to make her quit.  Mikami tells her that if she really feels that way, she can leave.

Misaki runs out to the bathroom.  When she notices that she's dropped her scarf on the floor, she hurriedly washes it, then breaks into tears.  Meanwhile, Mikami waits for her in the classroom.

During a cabin check, Tsutsumi apologizes to Nakahara for bringing up a sensitive subject before.  (In episode 4 he had asked Nakahara why he wasn't trying to be a pilot since he graduated from an airline university.)  Nakahara tells him that he'll just do his best as an engineer.  Tsutsumi mentions that Misaki is still putting on a cheerful face even though she didn't get to go on to OJT and Nakahara is shocked to hear it. 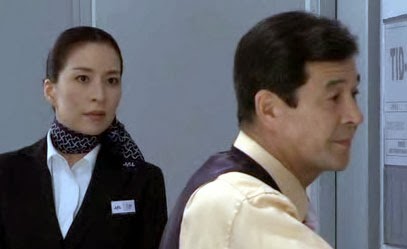 When Misaki doesn't return to class, Mikami walks out of the classroom to find Director Dazai right outside.  He sympathetically tells her it's hard work raising a trainee.

Nakahara sees Mikami in the lobby and asks her if Misaki is not fit to be a cabin attendant.  Mikami tells him that fit or not, Misaki rebelled against her training again. 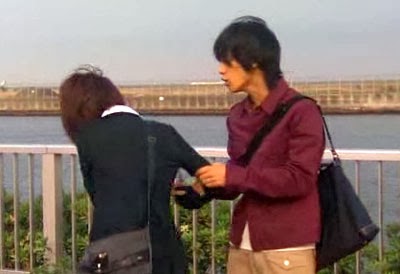 Nakahara finds Misaki and asks her why she lied to him about advancing to OJT.  She tries to run away, but he grabs her and demands to know why she's ditching class.  Misaki tells him that for the first time, she's given something her full effort and is still being told that she's not cut out for the job.  She doesn't know what she should do anymore. 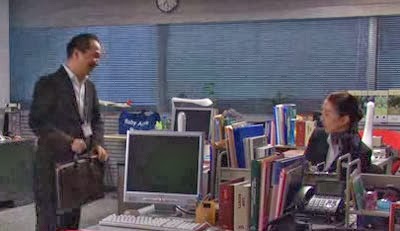 Captain Sakurada stops in to see Mikami at her desk.  He asks her if Misaki still can't go on to OJT.  Mikami tells him that perhaps she can't let go of the past, and he asks if it's regarding Asada Kyoko.  He tells her that although Asada and Misaki are similar, the major difference between them is that Mikami is Misaki's instructor.

The next day, Nakahara finds Misaki at the basketball court and orders her to follow him.  Meanwhile, it's the day of the zoo excursion and Sekiyama meets Wakamura.  She asks where Nakahara is, and Wakamura informs her that he cancelled, saying something important came up. 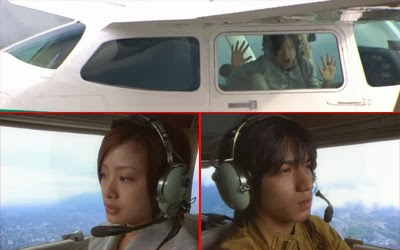 Nakahara brings Misaki to an airfield where a small plane is waiting for them.  He takes her up for a ride and she apologizes for accusing him of not knowing how it feels to give something up.  He tells her that planes are able to fly because someone didn't think it was impossible.  He urges her to stop thinking that things are impossible.  Misaki decides that she really wants to fly.

At the zoo, Wakamura is being overly cheerful.  As she unpacks the lavish lunch she has made, Sekiyama can tell that she's feeling down. 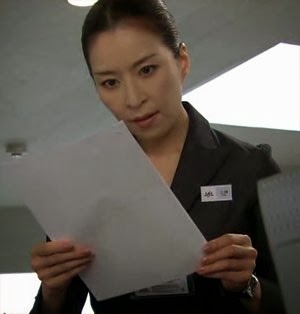 The next morning, Mikami arrives at her desk to find a new report from Misaki.  It seriously outlines her goals as a cabin attendant. 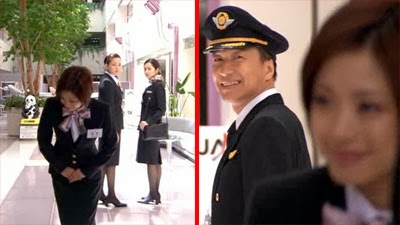 In the lobby, Misaki does Greeting Super Training by bowing and greeting every person that passes.  Murayama tells her to stop, it's embarrassing, but Misaki carries on.  Tsutsumi asks if she's lost her mind, but Captain Sakurada just smiles.

In the classroom, Misaki apologizes to Mikami.  Mikami tells her about Asada Kyoko who was bright and friendly.  She was disliked by her senpais (seniors) but was always requested for by the passengers.  On one flight a passenger had a heart attack and later died at the hospital.  The last person he had spoken with was Asada.

Although everything had been done by the book, and the doctor said that the heart attack was inevitable, Asada blamed herself and quit her job.  She later died in an accident.  Before she had quit, she said that she wished she had never become a cabin attendant.  Mikami was regretful that her favorite trainee had said that.  She hadn't been able to teach her the joys and fulfilling aspects of the job. 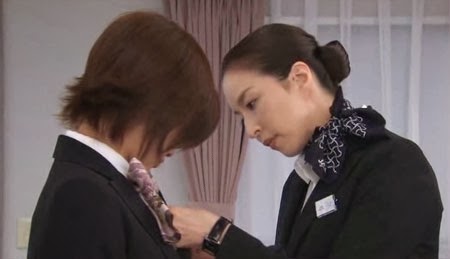 She tells Misaki that it will be harder for her than the other trainees.  She will have to have determination, experience and a  passion for flying.  Misaki confirms that she's prepared, and Mikami pins her name tag onto her jacket.  She tells her that she wanted her to fully understand the strictness and dreadfulness of being a cabin attendant before she moved forward.

The next morning as Misaki goes to report to OJT, Director Dazai watches her with delight.  Misaki passes Nakahara in the lobby and gives him a thumbs up and he smiles.

In the operation office, Misaki is introduced to her trainer, Asou.  Asou tells her that her real training is about to start so she better be prepared.  All the trainees look worried, but then Misaki breaks into a smile and says, "Yes sir!  As if I wouldn't be!" 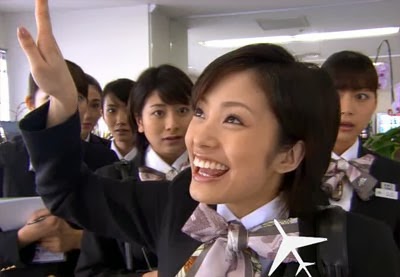 The one thing that disappointed me in this episode was Mikami's story about her junior, Asada Kyoko.  I thought that something more dire had happened to make her so worried and protective of Misaki, such as a passenger dying directly because she had not been able to remember her training.  Or perhaps she had committed suicide over a work-related crisis.  While the woman in question did die, it was due to an unrelated accident.  It seemed to me that her quitting her job over something that wasn't actually her fault should not have been enough to make Mikami so sensitive towards Misaki, that she would hold her back when the rest of the committee deemed her fit for OJT.

Other than that, it was fun to see Misaki's indomitable spirit endure, and for her to mature a little more.  Training under Asou will be difficult, but I'm not sure which of the two will suffer more.
Posted by Panda at 6:00 AM