Misaki's enthusiasm is winning so far, as she joins the other girls for On The Job Training. The stern Asou, however, will be her instructor and you have to wonder whose spirit will dominate the other. Granted, Misaki still has a lot to learn, but she tends to have an effect on everyone she meets.

When Instructor Kinoshita asks the girls what they hope to accomplish that day in OJT, Wakamura says that she would like to do her best on galley duty. Misaki encourages her to aspire to do more. She herself would like to win the hearts and affection of the passengers. Kinoshita and Wakamura look at her dumbfounded.

Wakamura and Misaki find Sekiyama and Hirota in the copy room. Sekiyama is down because she has been assigned to the same flight as Murayama aka the Iron Woman. 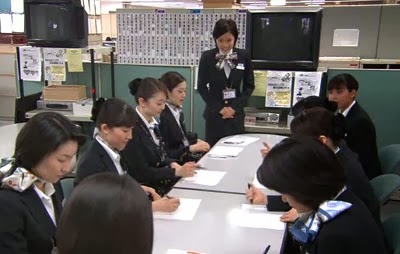 During the briefing, Misaki introduces herself, and the senior attendants all remark that she's that Misaki. She says that as the anticipated rookie, she'll do her best. Everyone ignores her. As they make their way through the lobby, Asou scolds Misaki for rolling her bag instead of carrying it. Trainees are supposed to bring shoulder bags that take up less space.

At the elevator, the other trainees rush to hold the doors open for the senior attendants. Oblivious, Misaki boards as well, setting off the limit alarm. She backs off uncertainly to the smug smiles of Asou and Murayama.

Once the doors close, the other trainees explain to Misaki that they always send the senior attendants up first to appease them so they won't say mean things about them. 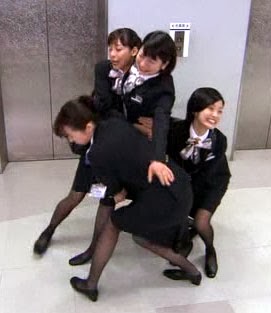 Misaki suggests taking the stairs, but Sekiyama's legs are suddenly frozen from her anxiety. The girls rush to get her moving again. In an effort to bolster the trainees, Misaki urges them to think of the senior attendants as pumpkins. 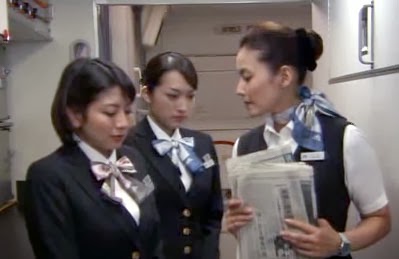 Once on the plane, Misaki is scolded by Asou who tells her to find a place for her rolling bag or get it off the plane. Hirota and Sekiyama also get reprimanded by Murayama for taking too long in the galley. The trainees are off to a rocky start.

After Captain Sakurada's briefing, Tsutsumi asks Misaki to bring back two domesu, and explains that it's the term for "domestic coffee". Once the passengers are on-board, Misaki is taken aback when she sees Mikami on the flight. Mikami explains that her presence is not work related.

During the beverage service, the girls experience various situations such as getting asked out, and passengers doing comedic acts that are not amusing to the cabin attendants. Misaki recklessly bursts into the galley and spills Wakamura's tray, then hits her in the head with a drawer, causing Wakamura to cry out in pain and attracting the attention of the passengers.

Misaki offers an unchaperoned child a tray of candy and is surprised when he takes a whole handful. As payment, he puts a rubber cockroach into her hand. She promptly screams and sends it flying, where it lands in Mikami's lap.

After the flight, Mikami scolds Misaki and Wakamura and tells them to think about what it means to be on a real flight.

The girls go into the lounge where they see their classmates in a state of depression after being scolded and insulted all day. Misaki invites them all for soba, Wakamura's treat. Wakamura is startled at the suggestion.

At the soba shop, Misaki gives everyone a pep talk, which is her specialty. She urges her classmates to fight back with their youthfulness.

On the next flight, Captain Sakurada asks Tsutsumi if he came up with a cabin announcement and Tsutsumi replies that he was just about to do so. The captain tells him that if he doesn't do these things before he's told to, he'll never make it to co-pilot. Sekiyama approaches the chastised Tsutsumi and encourages him to work hard and challenge them with his youth.

During the flight, an older gentleman gets Misaki to play Go with him between her duties. She feels like she's getting the hang of the job. In the galley, she tells Sekiyama that all they needed was confidence. As long as they keep their heads up, Murayama won't say anything. Just then Murayama comes around the corner and tells them to stop wasting time. 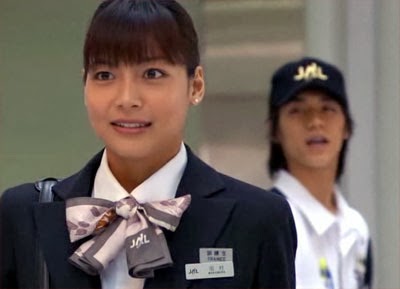 Meanwhile back at the airport, Wakamura sees Nakahara in the lobby and turns to avoid him. Nakahara calls out to her and apologizes for canceling on going to the zoo. She tells him that she had fun with Sekiyama and turns to leave, when Nakahara suggests that they go another day. That cheers Wakamura up considerably. 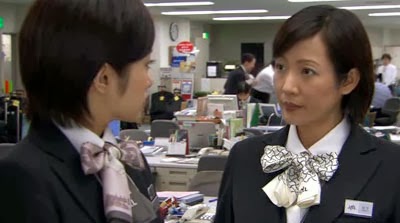 Back in the operation office, Kinoshita asks Misaki how the flight went, and Misaki happily says it was perfect. Kinoshita tells her that Asou reported she has no comprehension of what service is.

Misaki finds Asou and asks her what she did wrong. Asou tells her that if she doesn't know it without someone telling her, then she's not qualified to be a cabin attendant. 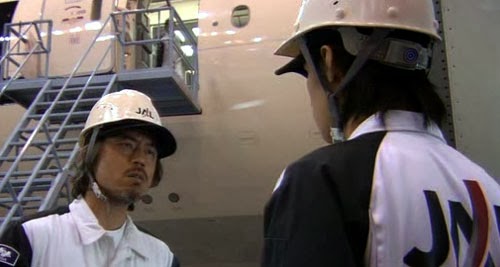 Engineer Watanabe scolds Nakahara for forgetting to turn in a report and tells him to think about what it means to be an engineer. Misaki shows up and starts venting to Nakahara. She asks him if it doesn't make him angry to be yelled at like that. Nakahara tells her that nothing will change by talking about the senior workers like that and says that he's busy.

The next day, Hirota and Wakamura are happy for Sekiyama who doesn't have to train with Murayama again since the trainers are being rotated. They feel sorry for Misaki, though, since she's still with Asou. Misaki goes to ask Mikami why her's is the only trainer who had not been changed. She tells Mikami that Asou doesn't like her, so she's hard on her in the reports.

Mikami explains that while Misaki had made one guest happy by playing a game with him, she didn't notice the other guests that were unhappy. She tells her that many problems arise that are not covered in the textbooks and the key to solving them is right in front of her.

That day, Misaki observes the senior cabin attendants serving passengers and realizes that she lost the standard of being a cabin attendant when she focused on just one guest. Thinking back, she found that she only remembered the gentleman she had played Go with and had no recollection of the woman who had lost her bell, or any of the other passengers she had served that day.

After her flight, Misaki goes to the engineering room and gets permission from Engineer Watanabe to search the plane for her passenger's lost bell. Nakahara asks what she's doing, and after she explains, he helps her and eventually finds the lost item. He reveals to her that in the beginning, he didn't listen to Watanabe and got scolded a lot. Then he realized that what Watanabe was saying was true and came to appreciate having him as a senior.

In the director's office, Kinoshita scolds Misaki for not attending the after flight meeting; she should have told someone that she was looking for the lost bell. Director Dazai is just happy that Misaki found the guest's belonging and tells her to make contact right away. Asou passes by and smiles. Dazai asks Misaki how it is working with her seniors, and isn't being taught miserable? Misaki says that although it's annoying and overly strict, having that kind of senior isn't bad. 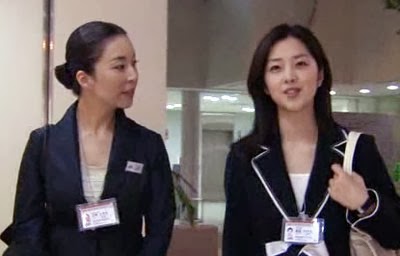 Mikami asks Asou how Misaki is doing. Asou tells her that Misaki won't listen to her seniors' words, is very easily self-satisfied, and is always complaining. But she will make a great cabin attendant given time. Mikami asks Asou to keep working hard with her. 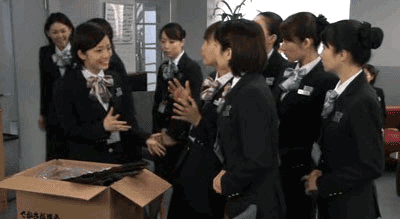 In the lounge, Misaki tells the other attendants that the grandmother she returned the bell to was so happy, she sent a big box of kelp. Misaki starts distributing the kelp, when Asou and Murayama arrive and tell the girls to prepare for the flight. Misaki tries to give them kelp, but they say they don't want it.

There are only two episodes left and Misaki is maturing ever so slowly. I have to wonder, though, where the "training" in "On The Job Training" was in this episode. Asou didn't correct Misaki's errors and make sure that all the passengers were happy. She let Misaki go through the whole flight giving poor service when it was obvious through her inexperience that she would not realize what she did wrong. Shouldn't Asou have told her on the spot rather than leave it to Mikami to tell her after the fact? If Misaki didn't take the corrections, then it would be her own fault, but I thought it was a strange way to train someone who is taking their first shift as a cabin attendant.

As always I enjoyed the physical comedy, and the rapport all the characters have for each other. Too bad there's no time to explore the side characters more, but Misaki needs all the help she can get, I suppose.
Posted by Panda at 2:53 AM