The cabin attendant trainees continue to strive toward their goals, though some are more successful than others.  Misaki's personality might brighten up the room, but it doesn't quite make up for the areas in which she's lacking.  We all knew someone like that at work or in school, right?  If you didn't, that person was likely you.

It's time for OJT (On the Job Training) and the class heads to the operation center.  Instructor Mikami takes them through the various tasks they will have to do.  Misaki sees Asou and calls out enthusiastically, earning herself a reprimand from Mikami.

Asou and Murayama approach the girls and tell them that when they're in OJT, they have to abide by the senior attendants' rules.  Asou urges Misaki to come to OJT soon.  When Asou and Murayama leave, Wakamura and Sekiyama rush to comfort Misaki after that thinly veiled threat, but find there is no need.  Misaki muses that she must be the next up and comer that everyone is looking forward to.  "That's not it." her friends say as she goes happily on her way.

Later in the pilot's office, Tsutsumi gives encouragement to Hirota and Misaki.  Captain Sakurada tells Misaki that he's looking forward to flying with her, which boosts her confidence even further. Mikami reminds her that she still has to pass a cumulative test and get committee approval before proceeding to OJT. 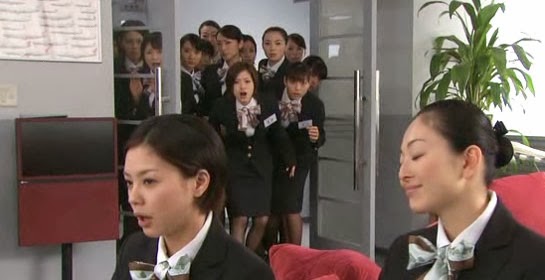 The girls worry about the test, but Misaki believes that everyone has been doing well up to that point so it will be fine.  Outside the lounge, they hear Instructor Kinoshita's students, Kubota and Oshima , talking about their class and how they bring the level of cabin attendants down.  They say that Misaki is sure to fail and the rest of the class isn't much better since she poisoned them.

Misaki steps forward to confront them, but Hirota speaks out first.  Kubota and Oshima deftly point out that Hirota was late to emergency training and was passed out of pity.  They call her friends followers, then move on to Sekiyama whose father is a pilot.  They wonder if she achieved her position through connections rather than skill.  When Misaki jumps in, they say they heard she was in a band and that the seats were empty during her live performances, maybe because the vocalist wasn't talented.  Mikami's class is rendered speechless as all their weak points have been hit.

Kinoshita comes in to retrieve her students.  She tells Mikami's class that you can be influenced by your surroundings for good or for bad.  Mikami's class gets fired up to prove themselves by passing the exam, and they go back to the classroom to devise a plan.

Wakamura runs off to meet with Nakahara.  She asks him if he would go to the zoo with her to celebrate if she passes her exam.  He says he wouldn't mind.  Wakamura is so happy, she thanks the panda statue in the lobby.  Kubota and Oshima criticize her for dating during this important time and tell her that she has poor taste in men.

Wakamura gets angry and runs back to the classroom to get in on the planning.  Hirota reveals that she had gone to the same college as Kubota.  She explains that Kubota is two-faced and only talks nicely around teachers and men.  In fact, they had fought over men, but she is winning 7-3. Wakamura announces that when they all pass the exam, she'll hold a soba party.

In the office, Director Dazai thanks the instructors and says he will be joining them on testing day. Kinoshita tells Mikami that she hopes Misaki doesn't do anything strange.  Even if she passes the test, she'll have nowhere to go if the committee doesn't accept her.

Wakamura and Misaki come in to ask for permission to use the model cabin so their class can practice before the test.  Director Dazai is impressed and wishes them luck. 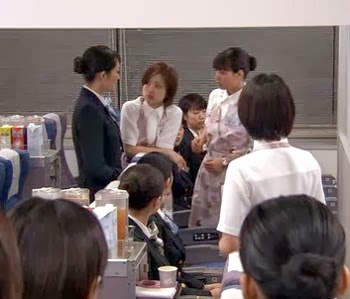 During practice, training devolves into bickering and blaming.  Hirota tells Misaki that it's because of her performance level that the whole class gets made fun of.  Everyone ends up walking out. 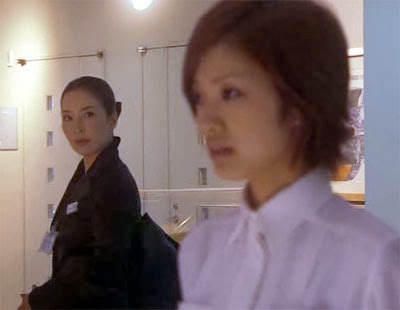 Misaki is sitting in the lobby when Mikami walks past.  Misaki asks her if she's slowing everyone down.  She tells Mikami that people are saying she's poisoning the class.  Mikami says that if those things are bothering her, she knows what to do now.

Misaki goes to eat at the diner.  Nakahara shows up and notices that she's feeling down.  He makes mention that the OJT is coming up, but Misaki doesn't seem nervous or excited.  She says she's a poison.  He asks her why she decided to become a cabin attendant in the first place, and she reveals that it was because of a guy, which he says is stupid.  But now she wants to see herself in uniform, flying in the sky.  She thinks of what Wakamura said about liking Nakahara's voice and wonders aloud about Wakamura and how a girl's feelings are hard to understand. 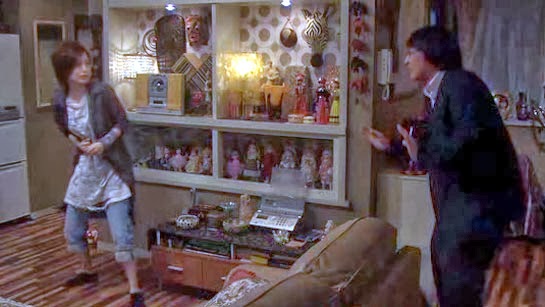 When Misaki goes home, the lights are on and she assumes Chii-chan has returned.  However, she finds a strange man trying to pick the lock to Chii-chan's room.  He claims to be her lonely ex-lover who had bought the furniture and appliances in the apartment.

Misaki asks him if he was the person Chii-chan was supposed to be living with, but he says that was someone else.  Chii-chan has many lovers.  How did he get in?  With a spare key he had made.  "Stalker!" Misaki screams.  She gets him to leave by threatening to call the police.  Before he goes, he asks her to give Chii-chan the message that Oka-chan isn't mad anymore.

The next morning, Misaki arrives to class later than usual, not wearing her jacket, and has a stain on her sleeve.  After class, she rushes out again ahead of everyone else.  Her friends are taken aback and worried.

In the hallway, Wakamura and Sekiyama see members of Kinoshita's class consulting with a foreign crew member in English and get nervous.

During lunch, Tsutsumi asks Hirota to go out with him in honor of her OJT.  He has in mind a nice Italian restaurant in Azabu where the dolce is especially delicious.  Hirota tells him that she's not interested in going out with a trainee.  He asks her if she will go out with him once he becomes a co-pilot, and she says she'll think about it.

Tsutsumi's joy is short-lived when Kubota and Oshima approach the table.  Kubota thanks Tsutsumi for "last time" and reveals that he took her to an Italian restaurant in Azabu where the dolce was delicious.  Tsutsumi assures Hirota that it's a different place, but she snaps at him and stalks off.  Tsutsumi says he didn't know that Kubota and Hirota knew each other.  Kubota claims to be winning 8-2 and Hirota's friends wonder who is telling the truth.

Mikami's class is feeling defeated.  At the end of class, Mikami tells her students that working is learning and persevering every day.  They should ask themselves what it means to be a cabin attendant.  After Mikami takes her leave, Misaki is the first one out again and everyone agrees that she's still so laid back. 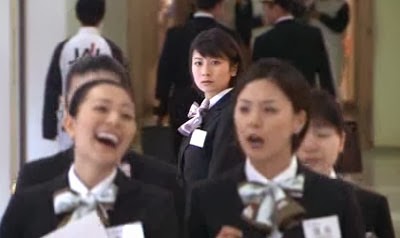 Sekiyama goes out to deliver the daily report and hears Kinoshita's students talking about Misaki being an idiot who does useless things.  They are laughing and wondering what she's up to now.

Sekiyama goes back to get her classmates and leads them to the model cabin where they see Misaki practicing.  They realize that she has been going there on her breaks to improve.

The class joins in to help Misaki train hard.  Kubota and Oshima stop by to mock them, asking if they really think they can beat Kinoshita's class this way.  Misaki tells them that winning or losing is not important, it's about being what a cabin attendant means to them.

Mikami's students continue training.  Higashino remarks that watching Misaki is like studying and Hirota agrees saying that she does so many things wrong that you have to keep checking. Sekiyama calls out corrections and Hirota observes that the once meek woman has gotten much bolder through her association with Misaki. 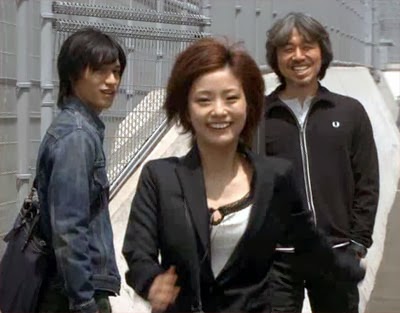 Nakahara sees Misaki by the fence and she seems nervous.  He asks her if she has studied properly and she assures him that she did all she could.  He tells her if that's the case, she should go in with confidence.  By the time Engineer Watanabe comes to ask how she's doing, she's back to her old self, confidently going on her way. 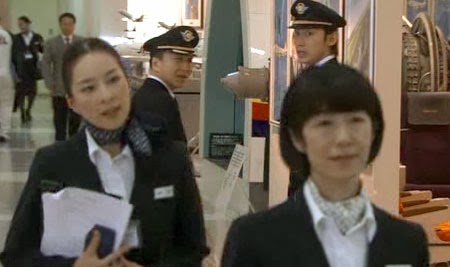 Mikami runs into Captain Sakurada and Tsutsumi in the lobby.  Chief Nagano approaches and says she will be participating in the exam and will grade the trainees strictly.  Then she informs the captain that he has a button that's come undone and walks off with Mikami trailing her.  Captain Sakurada tells Tsutsumi that it's going to be tough.

The testing seems to go well and Wakamura throws the soba party.  Misaki is especially excited when the shrimp tempura is brought out.  Hirota asks Wakamura if Misaki worked so hard solely for the shrimp. Wakamura says she doesn't want to think that  way, but she's afraid that may be the case.

At the evaluation meeting, Kinoshita and Nagano pass Misaki, saying that she will have to train hard during OJT.  Mikami has something she wants to say and they listen expectantly.

The next day, Mikami calls each girl up one by one to pin official badges on their jackets.  Only Misaki's  name is not called.  Mikami tells her that she's not fully qualified to be a cabin attendant and will not be moving on to OJT.

Poor Misaki, I thought she had finally proven herself when she took the initiative to do extra practice sessions on her own.  Although she was still too confident and easy going in the beginning of the episode, she seemed to get more serious about her job.  It was unnecessarily harsh for Mikami to let her wait in anticipation while she gave the other 19 girls their badges, before announcing that Misaki had failed.  If that were going to be the case, shouldn't she have given her extra guidance beforehand, or at least take her aside and let her know that she wasn't passing?  I guess this way had more of an impact, and it is hard to get through to Misaki, so it must be serving some purpose.

The introduction of Kubota and Oshima from Kinoshita's class provided some tension through rivalry, and gave more significance to the achievements of Mikami's class.  They were all able to grow and become a team with Misaki being a cheerleader, a liability and finally an inspiration.  Ah, but what a crushing blow she received at the end!

The highlight of this episode was the appearance of the other half of Nankai Candies.  Yamasaki Shizuyo who plays Chii-chan, Misaki's roommate, is part of a comedic duo with Yamasato Ryouta who plays her ex-lover, Oka-chan.  Hopefully they have some scenes together at some point because they play off of each other so well.
Posted by Panda at 9:53 PM