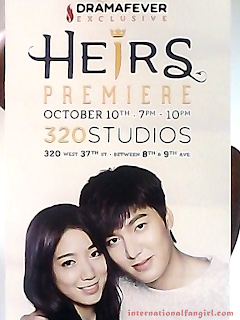 I attended the DramaFever premiere of Heirs a few days ago with Tiger-Zan. DramaFever is co-producing the drama and even though they posted the first episode a day before the event, we decided mingling and open bar wouldn't hurt.
When we arrived to the venue, there was a line to get in. Didn't surprise me seeing as there was a waiting list to get tickets on Eventbrite the same day they were released (Sept.19th).It wasn't too long of a wait, and the weather was ok, so I was happy. We took the elevator to the 14th floor of the building to hit another line to get in. I thought Tiger would die seeing as she hates elevators and barely made it out of that one because of the small and crowded space between the venue area and corridor.

This is our second DramaFever event, and the staff was friendly and fun. The venue was very nice, with a balcony and awesome view of the city. There was a cutout of Lee Min Ho and Park Shin Hye that people could take pictures with and everyone received an Heirs Poster of the event. An open bar (which disappointed Tiger as she drowned herself in Samuel Adams and Pinot Grigio), appetizers of chicken skewers, sliders and a bunch of stuff that I knew no names for, that sat on the left side of the room while the chairs and a big screen filled the rest of the place.

They started off with an intro and some trivia. This is where I failed. Partly due to not fully paying attention to the question and a complete fog of memory I was chosen to answer the first trivia question. "1. Name 5 dramas, not including Heirs, with Lee Min Ho." Now I thought of 4 but when I asked "4? or 5?" and they responded "5.", I froze up and blanked out. Needless to say, Tiger was pissed off at me for the rest of the night. (I forgot I Am Sam, I only remember City Hunter, Personal Taste, Boys Over Flowers, and Faith.) Other trivia questions that were asked:

2. Name 5 dramas, besides Heirs, with Park Shin Hye.
3. Name a drama besides Boys of Flowers, where someone nearly drowns.
4. Name a drama someone gets amnesia. (Tiger says All of Them, lol)
5. Krystal stars in 'Heirs'. Name the group she's in as well as 2 of their songs.
6. In 'You are Beautiful', why did the main character have to pretend to be a boy.


Lessons I have learned from this incident. A. Don't drink before trivia. B. Pay attention. C. Google everything before a DramaFever event just in case.

We watched a short personal message from Park Shin Hye and Lee Min Ho. When it was over they showed a part where they were getting up to leave. Now this part had a few people thinking that the stars would pop out in person and say hello. But they didn't. :(

Heirs Episode one was revealed and received a very positive response from the audience. Much so, that we were shown part of Episode 2 as well. I won't go into detail about the drama, but with adorable english (engrish) and a Min Ho shower within the first few minutes, I can get used to this.

I also meet Stephanie of Crazy For Kdrama and who has been a guest writer for DramaFever. She was pretty sweet and I wish we could have chatted some more. I did get her business card and will keep in touch.(Tiger went to go get drinks and when she came back, she almost killed me for not having my business cards on hand!)

Thanks DramaFever for the awesome event, I hope to attend more in the future and thanks Tiger-Zan for attempting to take pictures and coming along for the ride.
Posted by Batzy at 8:59 AM