We're at the halfway mark and Misaki seems to be coming along slowly but surely.  It should take the rest of the series for her to become a cabin attendant at this rate, but that's okay.  She's a fun mess and there's nothing like character development to make you rethink your own progress! 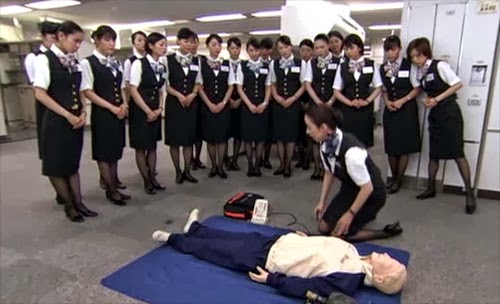 Misaki is the first one to class for once.  Wakamura is so surprised, she asks her if she has a fever.  The lecture beings with atmospheric pressure and proceeds to CPR training.  Sekiyama fails at pumping the model's heart. 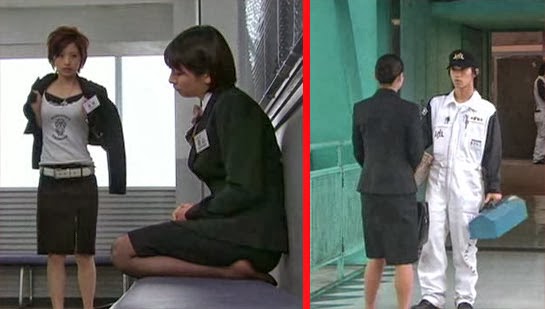 In the locker room, Sekiyama is gloomy after her performance and Misaki tries to comfort her.  Meanwhile, Wakamura runs out to find Nakahara.  She makes the excuse of not understanding a lecture to ask for his help.  He agrees to meet her after his shift.

Misaki and Sekiyama run into Tsutsumi and Captain Sakurada in the lobby.  Tsutsumi offers Sekiyama his handkerchief and the captain asks him why he doesn't put forth that kind of consideration in his job. 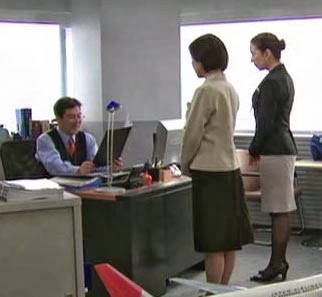 Director Dazai tells the instructors that Misaki has been more motivated lately.  Kinoshita remarks that she hopes Misaki doesn't do something crazy during her On The Job Training.  Mikami assures her that it won't happen since she's teaching her properly. 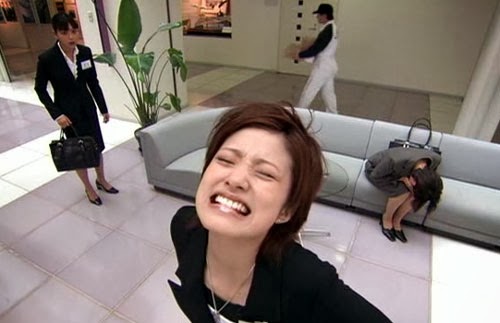 Wakamura comes happily into the lobby to see a depressed Sekiyama, and Misaki who is concentrating very hard.  Misaki decides that they need to have a special training session that night to help Sekiyama. Wakamura tries to get out of it, but in the end she can't abandon Sekiyama. 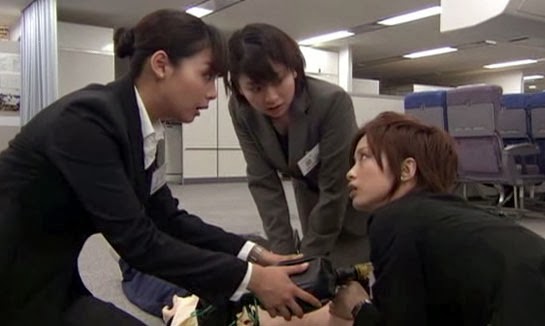 The girls sneak into the training room to work with Suzi, as Misaki calls the CPR model.  Sekiyama struggles and Wakamura is distracted, checking her watch often and not giving the oxygen properly.  Misaki asks her why she's not concentrating and jokingly guesses that she's going on a date.  Wakamura hesitates and Misaki starts interrogating her about who she's dating.  Wakamura tries to make her escape, but Misaki pulls her back where she falls onto Suzi who incidentally stops working. 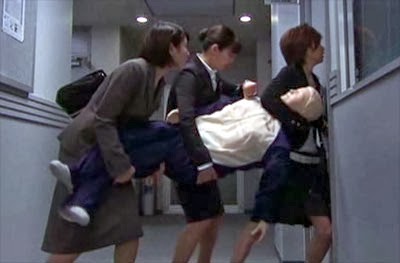 The girls keep quiet when a security guard comes to check the room.  They sneak out to avoid getting caught, but end up getting locked out, still holding Suzi.  They decide to go apologize and take Suzi to the staff room, but that's locked too.  Since their apology will have to wait until the next day, they hide Suzi in the lounge. 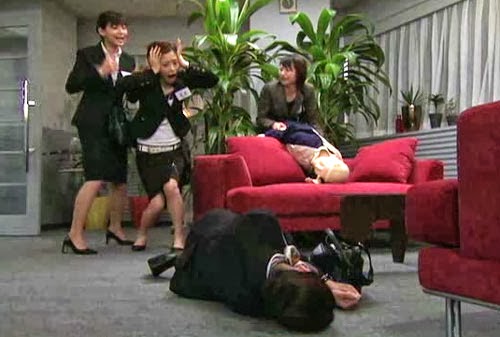 Asou comes in while they're situating Suzi behind the couch and asks them what they're planning now. Wakamura and Misaki block her view, insisting that they aren't planning anything.  Sekiyama holds Suzi by herself for as long as she can, but ends up dropping her, and it falls over the back of the couch and next to Asou who sat herself down there.  Asou is so shocked that she faints onto the floor.

The girls gather up Suzi and run for the stairs.  Meanwhile, Murayama arrives at the lounge, sees Asou collapsed on the floor, and calls for an ambulance.

The girls catch a taxi, frantic to hide Suzi before they get caught.  Outside, Tsutsui is following Hirota and trying to convince her to go out with him.  Hirota catches sight of the girls in the taxi and thinks they're with a foreigner.

After his shift, Nakahara waits for Wakamura, but she doesn't shop up.  The other engineers come and invite him to dinner, so he leaves with them.

The girls finally make it to Wakamura's father's soba shop, but when Misaki sees the engineers there, she backs out and tells the girls to go to her place.

The three of them struggle to get Suzi to the apartment and when they finally get there, Sekiyama discovers that one of Suzi's arms are missing.  Wakamura blames Misaki for always doing things impulsively without any consideration for anyone else.  Misaki retorts that she shouldn't blame others when she can't think for herself.  Besides, Wakamura had been all impatient for her date when she can't even confess her feelings.

Wakamura calls Misaki heartless and tells her that she can't be a first class cabin attendant, after all she's never even had a female friend so she can't understand other girls' feelings.  They both claim that they wouldn't want to fly with each other and Wakamura storms out.  Sekiyama is hesitant, so Misaki tells her to just go home. 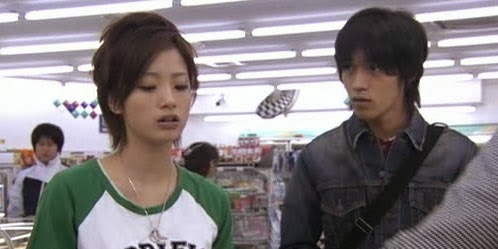 Later at the convenience store, Nakahara runs into Misaki and asks why she's upset.  She tells him that she's just hungry.  When he asks about Wakamura, she brushes him off and leaves.

The next day during training, the girls perform so badly that Mikami tells them kindergarten students could do better.  They need to reflect and do the lesson again the following day. 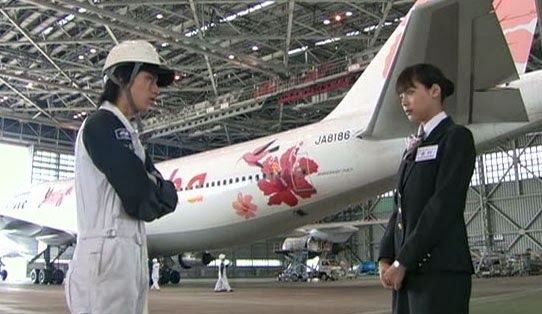 Wakamura goes to the engineering room to apologize to Nakahara for standing him up the night before.  He asks her what happened to make Misaki so unhappy.  When Wakamura doesn't answer, he tells her that it must b troubling to have a friend like Misaki.  Wakamura says they're not like that. 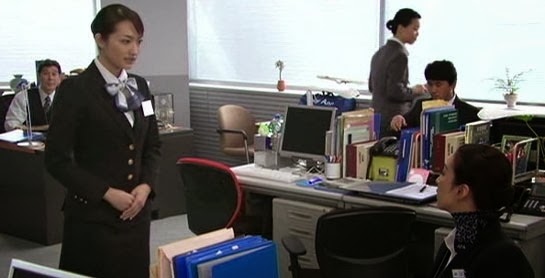 In the office, the missing CPR model is reported to instructor Kinoshita.  Hirota happens to overhear and realizes that the foreigner she saw in the taxi must have actually been the model.  Mikami asks her what's wrong and she says nothing, but Mikami looks thoughtful.

In the cafeteria, Hirota comments on Misaki eating alone and tells her that she saw her in a taxi with two... no, three other people.  Then she mentions that Kinoshita's class was fussing over something.  Misaki excuses herself, but Hirota tells her that the punishment will be severe if anything is missing. 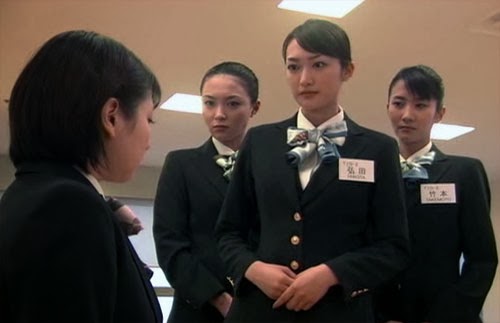 When Sekiyama arrives to eat alone, Hirota and her friends ask her if she fought with Misaki.  They tell her that if they aren't getting along with each other, that's their problem to work out, but don't  drag the rest of the class into it. 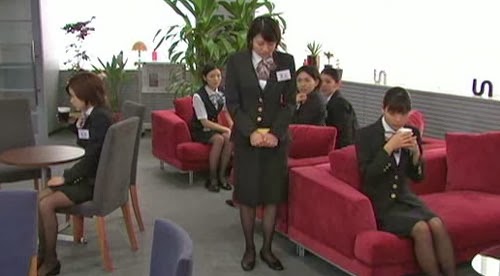 Sekiyama finds Wakamura and Misaki sitting separately in the lounge.  She suggests they all apologize for taking the model out and losing the arm, and says they should look for it.  Misaki and Wakamura give each other disparaging looks.  Sekiyama tells them to stop it, and that she's disappointed in them both.

Captain Sakurada comes to give a speech to the class.  he talks about how he joined a choir and each part had to listen to the others to know how the song would come together.  He compares it to the flight industry and how each cabin attendant must also come together with their knowledge and cooperate with each other.

That night, Sekiyama goes out to look for the arm and runs into Misaki who is also searching for it.  They work as a team until they get to the river and see Wakamura who is looking for the arm, but claims she's doing after dinner exercise.

They all search together and Misaki apologizes to Wakamura for pushing her around.  She admits she caused a lot of trouble  She usually hangs out with guys so she doesn't usually admit when she's wrong and always tends to rush into things.  Wakamura admits that she's not clear when she communicates and that she was the one who lost the arm so she became frustrated and angry. 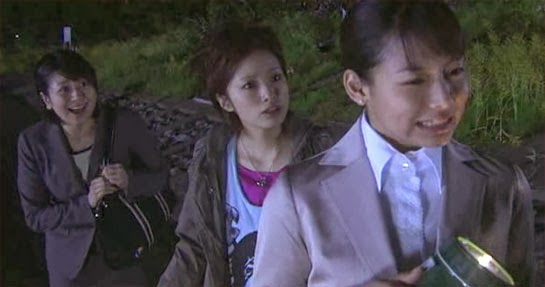 Wakamura tells Mikami that she had made a study date with Nakahara because she likes him.  Sekiyama is gleeful and Misaki is perplexed.  Why does Wakamura like that guy?  Wakamura explains that he's good looking, not a player, gentle, and after seeing him work so hard, she's inspired to work hard too.  She also likes his voice and when he calls her name, her heart beats faster.

Misaki says that Nakahara had pointed out that they had a good friendship.  Wakamura reveals that he had told her the same thing and it was nice hearing it from someone else, what good friends they are.  Sekiyama comments that before they know it, they're always together.  Wakamura wonders why and Misaki says it's because they're really compatible.

The girls continue to look for Suzi's arm and when they can't find it, they dejectedly head back to the soba shop.  There, they see Wakamura's father cleaning the arm which he says he found outside. 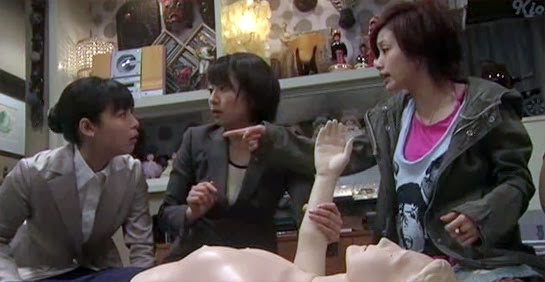 The girls rush back to Misaki's apartment.  While reattaching the arm, they find the on/off switch and realize that they hadn't broken the model after all; it had just been switched off.

The next morning, the girls return the model and apologize to Director Dazai.  They all claim responsibility for taking company property without permission.  Mikami tells them that they must have gotten extra practice with the model, so she's looking forward to seeing them perform in class.

Despite their lack of practice, the girls are once again unified and work perfectly well as a team.  As they are happily heading out, Mikami comes up with a cleaning cart and informs them that their punishment is to clean the model cabin for a week. 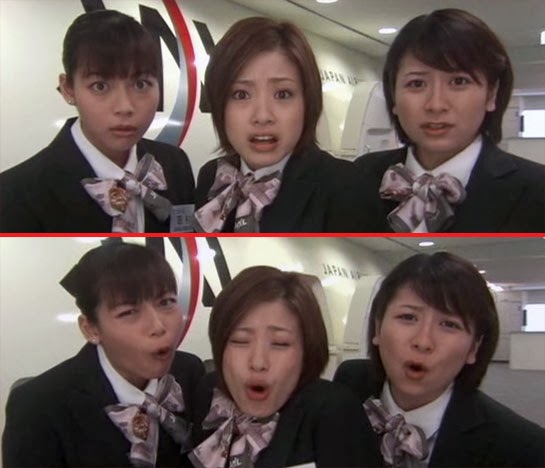 Needless to say, they aren't happy with their fate, but they actually got off pretty easily.  It seems that no one figured out the cause of Asou's fainting, including her, so the girls never had to take responsibility for her trip to the hospital.

This was a fun episode that tore the girls apart, then put them back together, strengthening their friendship in the process.  Now that Wakamura has revealed her pure and heartfelt crush on Nakahara, I really can't see how Misaki would end up with him, and my hopes for any romantic aspect to this drama have been dashed. Well, it is classified as a comedy, not a rom-com, so it makes sense that Nakahara is just a condiment and not the main course.  Too bad.
Posted by Panda at 12:16 AM