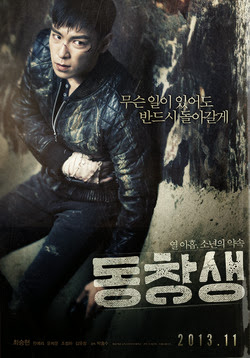 Commitment stars Big Bang's T.O.P (Choi Seung Hyun) as Myung Hoon. Shortly after his father's death during an attempt to return home from a mission, Myung Hoon is dragged into a similar fate. He plays a young man who is forced to become a North Korean spy in South Korea in order to save his younger sister, Hye In (Kim You Jung). He goes under intensive training for about two years and begins his mission to bring back a package, which is later to be revealed as a bunch of diamonds, in exchange for his sister's freedom.

In South Korea, Myung Hoon is adopted by foster parents, who are also Unit 8 North Korean spies. They make their way posing in a local pharmacy while money laundering. While waiting for instructions from his handler, Moon Sang Chul (Jo Sung Ha), Myung Hoon takes on the alias of Dae Ho and is enrolled into high school. He then meets a girl named Hye In (Han Ye Ri), an aspiring dancer who is bullied at the school. Seeing as the girl with the same name as his younger sister was in trouble, he begins to befriend her and save her. (Because that's the type of stuff Oppas do.)

When things get complicated, Sang Chul personally comes to South Korea in a desperate attempt to retrieve the package. Things get heated in a final showdown between Myung Hoon, Sang Chul and Je-Moon (Cha Jung Min), the South Korean detective who has been managing cases of North Korean spies posing as deflectors and their murders.

This movie is a melodramatic/action film that's basis is revolving around a power struggle of two North Korean teams in South Korea, Unit 8, which Myung Hoon is a part of, and Sector 25. It takes place in 2009 and 2011, while Kim Jong Il was still in power.

Pup and I ran to the movies to see Commitment, mainly for two reasons:

In October, I was one of three people to win a contest held by Asian In New York via their Facebook page. I won tickets to see Yoo Ah In's Tough as Iron. I shortly received an email stating if I could pick up the tickets at their Long Island City office and was warned that Asian movies leave the theaters pretty quickly. I picked up the tickets, got sick, tried to go see the movie a few days later and BAM... you guessed it, it was no longer showing. Highly disappointed, I took this as a learning experience. The words of that email echoed in my mind for a while and I vowed to run to any theater playing an Asian movie that I highly wanted to see, at the drop of a dime. When I found out Commitment was opening on Friday, December 6th, we were on a mission to see it. I was determined to see it and write a review. Game face and all, we managed to see it at the 5PM showing the following day.

Now that the movie is set up for you and the events that lead to me writing this review have been clarified, here's what I felt about it. (I am trying not to add spoilers here, and yes, I will be as objective as possible.)

I saw Secret Greatly a while long ago, I knew what kind of feel this movie was going to give off, though Commitment barely had any humor in it. T.O.P gave a pretty good performance despite reviews of him only being able to display one-emotion/ facial expression throughout the whole movie. (Something I expected as it IS T.O.P...and it fit well.) Even though he is 26, he was not out of place as a high school student and did suit the role. (The age gap is reasonably common in Kdramas/movies. ie: Lee Min Ho in Heirs.)

There was a great attempt at showing his character's struggle of being a killer for the sake of saving his sister and the transitioning weight of still just being a kid. This was depicted in his expression and actions between the bad ass vibe he gave during an altercation and his regret and sorrowful demeanor after. He is known to be a stiff and not dance very well, which gave for a good show when his action scenes came on. The hand to hand combat scenes were fast paced and his stiff, swift and steady movements led to some pretty sweet action. The camera work during these scenes flowed very well with his actions, unlike the sloppy and unappealing angles shown in the beginning of the movie while his on screen dad fought. (Yuck.)

I like how the movie didn't wrap up all this action and drama with a sappy, romantic ending where they live happily ever after just for the sake of tying up loose ends. The plot seemed a bit shaky and but not too hard to follow as I sat in the theater trying to piece together why certain things were happening. That's just part of the fun in watching a movie. I did get hang of it all by the end so there's no real complaint here. The action was standard and invoked some audible cringes and gasps. I enjoyed it and vowed to be cautious fangirl when watching a movie about attractive men as North Korean spies, since the ending is well... Go see for yourself.

Special shout out and thank yous go to Asian In New York for the opportunities and events that help keep me to up-to-date and informed on what's going on in the Asian Community.
Posted by Batzy at 6:42 AM