First Impressions:// You Who Came From the Stars 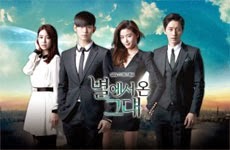 Otherwise known as My Love From Another Star, this drama is about an alien who comes to Earth in the Joseon era, and has waited 400 years for the coming of a comet which will enable him to return home. Of course being that this is a rom com melo fantasy, love will inevitably get in the way of his plans

The first episode did a good job of introducing the characters, establishing their dynamics, and setting the scene. It was entertaining from the start, though the writing will have to be masterful in order for things to be believable from a relationship standpoint. I have high hopes since screenwriter Park Ji Eun has had a good track record, most recently winning the best screenwriter award for the highly rated You Who Rolled In Unexpectedly.

"Annals of the Joseon Dynasty 1st Year of King Gwang Hae, recorded on September 25th. In the skies of Gan Sung Goon, Won Joo Mok, Kang Ryung Bu and Choon Chun Bu, there was a UFO that looked like a bowl. It was fast as an arrow. With a loud noise, it disappeared with flames. There were no clouds when this happened."

The drama starts with alien Do Min Joon's first interaction on planet Earth. The special effects were done well, and Kim Soo Hyun looks quite charming as he walks along with time seemingly frozen; leaves, debris and people hanging motionless in the air.

Jump to the present and a well appreciated shower scene. Kim Soo Hyun portrays Do Min Joon's detached, emotionless nature well. You get a sense of the vast age, alienation, poise and intelligence of the alien who is awaiting the time when he can leave this planet. 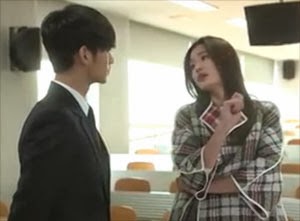 Jun Ji Hyun plays Chun Song Yi, an extremely immature top hallyu actress. She is of the level of self absorbed obnoxiousness that is usually reserved for male lead roles, and Jun Ji Hyun does an outstanding job of being exasperating, but also evoking a bit of sympathy. On one hand, it seems inconceivable that such a highly elevated man from an advanced race would ever fall for a narcissistic bimbo like Song Yi. Yet there is a glimmer of something that makes the viewer concede that it may just be possible. In the meantime, their interactions are hilarious.

A connection between the past and the present will surely take hold of Min Joon's detached heart and give it a good shake. There is a lot of potential for the melo part of the drama to draw us in deeper emotionally and make us believe in fate.

The supporting cast promises to complicate things, in a good way, as well. Na Young Hee as Song Yi's mother is quite a character. I'm happy to see her portraying a silly woman in a perm, as her previous roles always shows her looking so sleek and dignified.

Park Hae Jin who is probably best known from East of Eden, but who I grew fond of in My Daughter Seo Young, plays Lee Hwi Kyung of S&C Group who has been pursuing Song Yi since childhood.

Then there is Yoo Se Mi played by Yoo In Na (Queen In Hyun's Man) who has her eyes on Hwi Kyung, and is trailing behind Song Yi in her acting career.

Although Kim Bo Mi who plays Song Yi's stylist probably won't get much of a storyline, I'm still including her here because she's adorable and after seeing her in various supporting roles, I really hope she gets to be the leading lady one day soon!

Judging by what I've seen from the first episode, I'm anticipating a good series. The characters are interesting, funny and evoke my curiosity. And there is a lot of room for individual development as well as that of the improbable romance. I do hope they have many Joseon era scenes, not just because I love Kim Soo Hyun in historical clothing, but I can see where it would give the plot more depth and believability.

Director Jang Tae Yoo did a great job with The Painter of the Wind and Tree With Deep Roots and so far You Who  Came From the Stars looks to be of the same caliber in that respect. And although chief producer Choi Moon Suk was involved in the disastrous Fashion King, he also produced some of my favorites including 49 Days, Protect the Boss and The Heirs.  With a great team both in front of, and behind the camera, I'll be pouncing on each episode as it airs.