I wasn't sure what to expect from a movie set in a mental hospital, just that it must be quirky and probably disturbing. All I knew was that it was characterized as a romantic comedy and the female lead thinks she's a cyborg.  If it hadn't starred Rain and Lim Soo Jung, I would have likely passed on it, which would have been my loss.  I'm a Cyborg, But That's OK is one of those films that you can watch multiple times and gain more insight from it with each viewing.

Lim Soo Jung plays Cha Young Goon, a young schizophrenic woman who hears radio broadcasts that guide her in living her life.  One day, the broadcast gives her directions to cut her wrist, insert wires, and plug herself in to be charged.  She's committed to a psychiatric institution for this apparent suicide attempt. 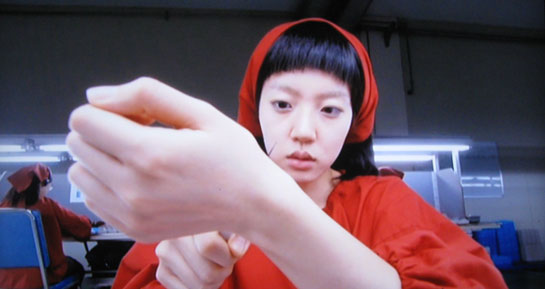 Lim Soo Jung's physical acting was amazing in the film.  Her expressions, speech, posture, gait, every movement was completely removed from a normal human being, and yet her innocence and emotions made this unrelatable character entirely relatable. 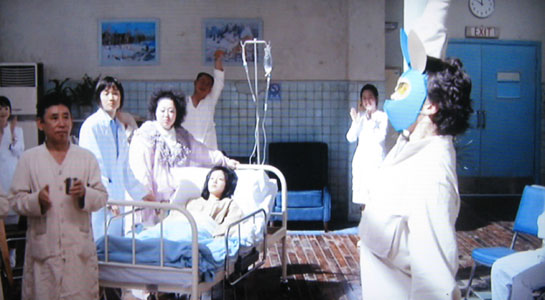 The hospital setting was bright, keeping it from having a depressive atmosphere.  And the characters that filled it were strange, but lovable instead of being dark and disconcerting.

Each had their own limitations and insights.  The woman who made up stories to fill in her missing memory after each shock treatment, the man so polite he had to walk backwards, the man who was convinced he was born with an elastic band around his waist, the girl who kept practicing to join a choir after failing an audition 30 years previously.  They each had a charm and enthusiasm that contributed to their cheerful community.

Park Il Sun played by Rain, takes an interest in this newcomer to the hospital.  When she asks the vending machine for tea, clearly expecting to receive it, he inserts a coin and pushes the button for her selection. Oblivious to his presence, Young Goon happily extracts the tea from the machine. 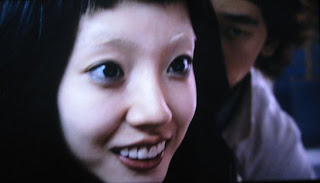 Il Sun is known for being an anti-social kleptomaniac and he regularly steals the traits of the other patients. "Transfer", he says, they touch his hand and it's done.  After walking in their shoes for a while, Il Sun returns what he took and life goes on as normal.  While he is in possession of their talent or obsession, they are free from it.  This agreed upon reality thus actually becomes reality, just as the norms and rules of society are real because the population agrees to it. 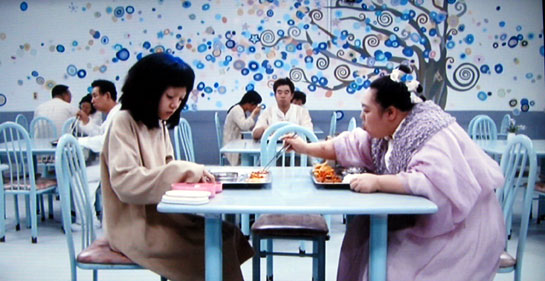 Young Goon, as a cyborg, cannot eat food and instead tries to charge up by licking batteries.  She also has to live by cyborg rules and there are seven sins in order of evillness:  Sympathy, Being Sad, Restlessness, Hesitation, Useless Daydreaming, Feeling Guilty and Thankfulness.  She is desperate to have her sympathy stolen so that she can kill the staff who are keeping her from her grandmother.

Il Sun gives into Young Goon's pleas to steal her sympathy.  After observing her for several days, he learns all her habits, and he also notices that she's exhausted because another patient (Wang Kop Dan) is eating her food.

Once her sympathy is gone, Young Goon is able to shoot bullets from her fingertips and start her mission. Except for the fact that her battery is running very low. 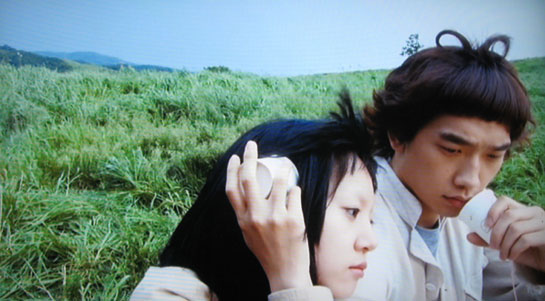 Weak and in mortal danger, Young Goon is force-fed through a tube.  Possessing her sympathy, Il Sun uses traits from the other patients to get close to her and understand her.  Simply asking or begging her to eat won't make it possible for her to do so.  To be drawn into their world, their rationale and reality, as they strengthen their relationship is a whimsical experience. Vivid colors are used as a backdrop to convey mood, and always, even in the most despairing scenes, the audience is never plunged into darkness.

Il Sun devises a plan to save Young Goon and he carries it out in such a tender, thoughtful way, that it seems part of his own psyche has been healed through the process of helping her. 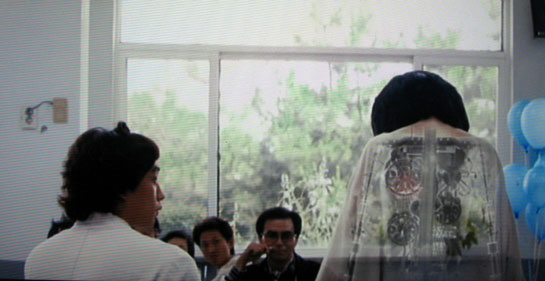 Il Sun has discovered true sympathy in understanding and supporting another person the way she needs to be supported.  Rather than the force-feeding the hospital does, Il Sun finds a solution that is compatible with the reality Young Goon's thoughts have created for her.  He works within her logic and thus makes a true connection with her.

When Il Sun asks another patient, Sul Mi, if she thinks he can hold out for 40 years like this without vanishing into a dot, she tells him, "Just give up hope.  And keep your strength up."  In actuality this is a very positive message.  Giving up hope can be very freeing.  It's a way of letting go.  When you stop worrying about your fear or goal (which can be an illogical one or just one that's not right for you), you can then put your energy into keeping up your strength and letting life fall into place as it will anyway.

This films illustrates how we are all trapped in our neuroses and preoccupations, limiting ourselves to live in a small closed-off world.  Through interaction and sharing with others, we can alter our perceptions and change our realities to reach a more nourishing state of being.  Our ideas shape our reality so it's important to only keep what works and give up the rest.

Sadly, I'm a Cyborg, But That's OK wasn't a big box office hit.  One reason that's been given is the confusing genre.  There was light-hearted comedy, brutal violence, emotional tragedy and romance all mixed in to the point where you didn't know what the next scene would bring.  I don't think Korea has had it's "Tim Burton" revolution where quirky dark comedies are popular yet.  It's a film that debuted before its time, which is a bit disappointing because it deserved a much better reception.
Posted by Panda at 1:14 AM