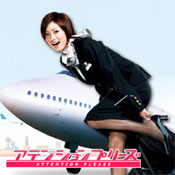 Misaki is still lagging in class and not having the proper mindset.  The instructor, Mikami, tells her that being a cabin attendant is not as easy as she thinks, but Misaki disagrees with plenty of attitude.  Thus episode two begins with enormous room for character growth and development!

Later in the break room, the other instructor (they never refer to her by name - I should look it up) reprimands Misaki for her improper behavior and dress.  She also complains to Director Dazai who asks her to be patient.

After a flight, the engineers come on board to check the plane.  Tsutsumi, the pilot trainee is trying to ply the captain with flattery as usual, and as usual is being brushed off.  After everyone leaves, Nakahara sits in the pilot's chair with a wistful look on his face.

Meanwhile, in the lobby, Misaki approaches Asou (aka Miss April) with flattery and asks her to autograph a brochure for her.  When Asou leaves, Misaki celebrates knowing that she can get three free specialty shrimps from Wakamura's father at the soba shop, as he's a fan of Miss April.

And she was right!  (It's always nice when dramas have food shots!  Although it can lead to impulse cooking and late night snacking!)

Sekiyama meets Wakamura's father and then has a lesson from the girls on proper slurping techniques. 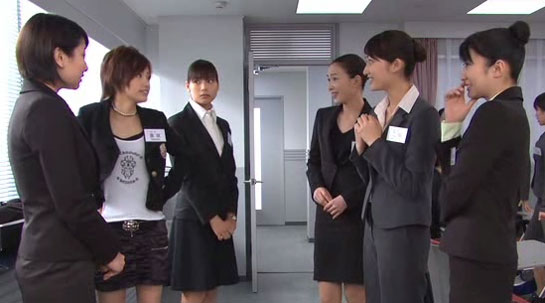 The next day Sekiyama brings a suit for Misaki.  Hirota and her friends are quick to say that she's donating it because of Misaki's ugly clothes.  Sekiyama insists that Misaki's clothes are beautiful, but gets called hypocritical and can't seem to stand up for herself.  Wakamura defends them more aggressively and Misaki breaks up the argument and accepts the suit.

Misaki fails at a conversational exercise.  Class illustrates the importance of being educated so that conversations on any subject can be carried out with customers.

At lunch, playboy Tsutsumi flirts with Hirota's group.  He then tries to impress them by going to Nakahara's table to ask them to check on the inconsistent brightness of the console.  Nakahara is irritated and goes to Tsutsumi's table to inform him that the whole console is controlled by a master switch and shames him by calling him a trainee.  Misaki witnesses it and wonders what the scene is all about.

That night, Misaki goes to the convenience store and catches Nakahara looking at a gravure magazine.  She follows him to eat Tan Tan Men and asks him why he became an engineer.  He says that he's forgotten the reason.  Misaki wonders what she, herself is doing; as a cabin attendant she will have to dress, talk and smile the same as everyone else.

Nakahara tells her that when you have innter beauty, it doesn't matter what you wear, but it's hard to do. Misaki reveals that she saw him make fun of Tsutsumi at the canteen and asks if he's jealous of those with a pilot's license.  If so, he should become a pilot himself.  Nakahara gets mad and leaves.

Misaki goes home and ponders inner beauty.  The next day the class is taking an exam and Misaki dresses in her usual unprofessional attire.  She apologizes to Sekiyama and tells her that the suit didn't fit.

Misaki does not perform well during the exam.  In the break room, she asks Tsutsumi why he decided to become a pilot.  He says that it's cool and the uniform is powerful.  No wonder Nakahara was angry, Misaki thinks to herself.  She tells him it's great that he made his dream come true, but he says that it hasn't happened yet.  He will do whatever it takes to become a captain.

The other instructor tells Director Dazai that with Misaki's test scores, it's pointless to have her continue. The director confirms with Mikami that there will be plenty of make-up exams.  The instructor tells Mikami that Misaki should be sent home for wearing improper attire and Mikami thanks her for her concern.

Misaki runs into Asou who is on her way to turn in her uniform to be cleaned.  She's called back urgently, so Misaki offers to take the uniform in for her.  She can't resist the urge to try it on.  While she's in the bathroom admiring herself, the cleaning woman comes in and pushes her out while she does her work. Misaki decides to walk around and put her cabin attendant training to the test, having fun fooling people in the process.

Half an hour later, Asou goes to the laundry to confirm the delivery and finds out that her uniform had not been turned in.  She grabs Tsutsumi and tells him that Misaki disappeared with her uniform.  The captain comes by and Tsutsumi spills the beans to Asou's dismay.  She tells him to find it since he's friends with Misaki, which he tries to deny.

Meanwhile, class has started and Misaki is still impersonating a cabin attendant in the lobby.  She notices the time and starts back, but finds herself accosted by delays.  A group of students asks her to take a picture and as she poses, they deflate her ego by having her take the picture of them.  She has to repeat the process with a camera from each member of the group before she can be released.  The next delay comes in the form of a man who wants to use her as a porter.  Since he is using her company, it's the least she can do, he tells her.

By this time, everyone knows that Asou is missing her uniform and other attendants are questioning her merit, which infuriates her with Misaki even more.  The instructor comes into the classroom looking for Misaki and tells the women that she stole a uniform.  Hirota's group begins gossiping about how crazy Misaki is.

Wakamura and Sekiyama run out to look for Misaki.  When they see Nakahara, they ask him to keep an eye out for her as well.  In the lobby, a woman grabs Misaki and demands to know why the flights are delayed. Misaki starts to tell her that it doesn't have anything to do with her, when another employee runs up to apologize to the customer.  Misaki follows her lead and apologizes as well. 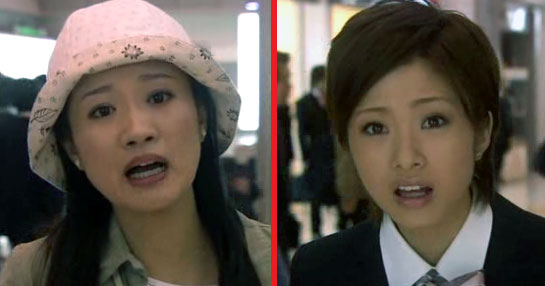 Misaki decides that there is nothing good about the uniform because there are too many responsibilities. She is stopped once again by a customer, this time a Mandarin speaker.  Misaki tries English with her, but it doesn't work, so she resorts to writing and pantomime.  She is finally able to help the woman get to her destination and is left with an understanding of her training and a sense of accomplishment.

Wakamura and Sekiyama find Misaki and tell her that she's in big trouble.  In the director's office, she apologizes to Asou, who seems to accept gracefully, but quietly (and ominously) she tells Misaki that she'll remember her.  Mikami reprimands Misaki, then asks her how it felt to wear the uniform.

Later, the captain runs into Mikami and asks her if it's "that girl" again.  "But isn't it great that the uniform was found?" he says.  Then he asks if Mikami still remembers about "her".  Mikami has a mysterious expression and the story is left as a promise for a later reveal.

Nakahara sees Misaki and asks if she's feeling depressed.  She is thinking about how happy she felt after helping the Chinese customer.  Nakahara talks about flying on a DC-10 when he was a kid.  Misaki can tell he really loves planes.  He tells her that he started to lose feeling for them after he started working around them.  Misaki says that he hasn't lost feeling for them and that he's more approachable when he's talking about planes.

Misaki wears the suit Sekiyama gave her the following day.  Although Hirota's group says she's wearing it out of guilt, and Mikami tells her that she may never wear a cabin attendant uniform, Mikami assures her that she will definitely wear one.  Mikami seems secretly pleased and tells her to stay after class for two hours each day to make up for missed lessons. 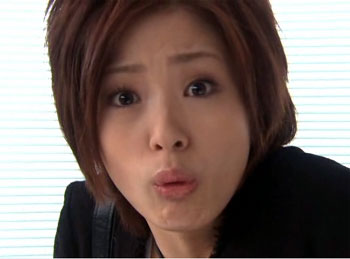 The episode ends with another cute and funny expression by Misaki.  I'm sensing a pattern here!  It should make for an interesting collection by the end of the series.

Misaki made some progress and it was satisfying to see how her experiences affected her attitude, as a classroom never could.  It's also nice to see that Nakahara's character has begun to gain some dimension. The hindrance to his happiness and fulfillment seems to be as restrictive as Misaki's.  Perhaps their opposite personalities will be of assistance to each other.

The mystery woman that the captain was discussing with Mikami is intriguing.  You get the feeling that she was a past student, and probably someone who helped Mikami become the instructor she is now.  Another reminder that people don't start off proficient at what they do, but get there through experience and hard work.

I'm hoping for a bit more chemistry between our leads in the next installment.  With 11 episodes in the series, they can't wait too long, can they?
Posted by Panda at 1:01 AM