When I read the synopsis of this film, I thought it would be about a television producer who developed a rapport for a perhaps wrongly accused prison inmate, and sought to find the perfect doenjang jjigae (soybean paste stew) for his last meal.  I couldn't have been more wrong, for the story took a sharp turn away from the ordinary from the very start.

I was initially interested in The Recipe because of Ryoo Seung Ryong.  His ability to become vastly different characters always captivates me.  His opening scenes were unexpectedly comical, which was a little misleading as it set a lighter tone than what awaits the viewer further along. 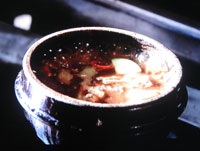 The prison inmate did turn out to be a heinous man, but the story didn't actually revolve around him.  Rather he served as a catalyst to introduce us to the main character, the doenjang, and the love story that surrounded it.  Instead of the inmate wanting the jjigae as his last meal, it turns out that the jjigae was what lead to his capture.  He had been so enthralled with eating it, that police were able to close in on him.

See the floating bits around him?  That isn't snow or a degraded picture, it's magic.  The aroma had the police so intoxicated that they stood there and drooled until he was done, and released from the spell, they were then able to arrest him.  My curiosity was completely piqued by this other-worldly jjigae.

Producer Choi, played by Ryoo Seung Ryong, set out to learn the secret of the jjigae, interviewing those involved with the case, following up on clues and learning about Jang Hye Jin, played by Lee Yo Won, the woman behind it all.

Beautiful wide shots of the forest, the ume trees and soybean fields give this film an ethereal quality as petals float past, or butterflies make their way gracefully across the screen.  The photography, direction and writing came together to bring us a fairy tale being built detail by detail before our eyes.

Jang Hye Jin meets Kim Hyun Soo, played by Lee Dong Wook, an ume winemaker.  They follow their own dreams in perfecting their crafts.  However, their love and interaction with each other lends itself to the birth of something truly exceptional.

We're taken ingredient by ingredient, learning how the slightest variation in any step can affect the final product.  Water, salt, soybeans, crock, sun, wind, and some other surprising elements go into making the doenjang which develops over time.  From beginning to end, nothing about it can be rushed.

Producer Choi enlists the help of a scientist who analyzes traces of the doenjang, which gives him hints about what to look for.  The impossible perfect salt, the mystery fermentation agent; and why does it attract butterflies?

In the midst of this pursuit is the love story that unfolds between Jang Hye Jin and Kim Hyun Soo.  Two pure souls who want a simple life together, but the world has intruded with complications, adding a tragic twist to their fates.  There is a tenderness in the two that enforces the romantic feeling of a fairy tale.  I've never seen Lee Dong Wook look more charismatic in anything that he's done.

I was looking for a heart-warming tear jerker, but found something with greater depth and complexity.  A story that changed Producer Choi by the end of the film, and has left me with lingering thoughts.