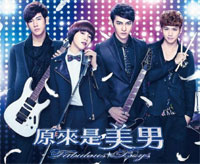 As a die hard fan of both You're Beautiful and Wang Dong Cheng (aka Jiro Wang) I was excited beyond reason to see the two come together in  Fabulous Boys.

Taiwanese adaptations don't typically stray from the original story line except to add a heavy dose of campy, slap-stick silliness to how it's portrayed.  Will I get bored watching the exact same story played out by different actors?  Nope!  I am in fangirl heaven! 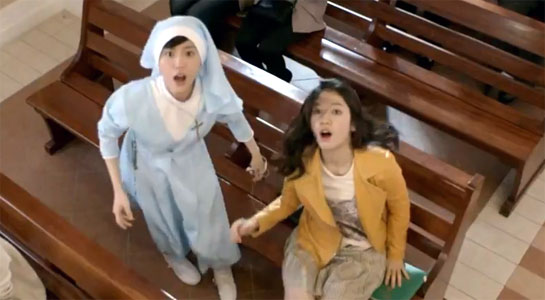 It was a nice touch to include Park Shin Hye (from the original) in the first episode, interacting with her Taiwanese counterpart.  We had to wait until episode eight of the Japanese version to see Jang Geun Suk's cameo, in which he gives advice to his counterpart, but it was well worth the wait, of course!

For the most part, Cheng Yu Xi fits the role of  Gao Mei Nu/Gao Mei Nan very well.  Her short hair and features do make her look like a young flower boy.  However at times her voice gets squeaky and the giggling during the drunk scene would convince most people that she was a girl, even if she wasn't!  Putting that aside, though, she plays the part well and I'm looking forward to the chemistry developing between her and her fellow A.N. JELL members.

Wang Dong Cheng stepped gorgeously into the role of the egotistical, though lonely and warm-hearted perfectionist, Huang Tai Qing.  He has captured his character's attitude and expressions in much the same way as his predecessors, but it will be in the softer scenes that his unique charm will shine through, which is something that I anticipate with great impatience.

Episode one hasn't really given Hwang In Deok as Jiang Xin Yu, and Evan Yo as Jeremy a chance to express themselves yet, but their scenes in the trailers look promising.

What I've heard of the soundtrack sounds awesome.  Wang Dong Cheng's voice is completely at home singing Promise and Believe (originally performed as Still by Lee Hong Ki.)  As a point of interest, Lee Hong Ki did record a Mandarin version of the song in 2010 entitled Holding Your Hand, with lyrics written by Amber Kuo, though Mandarin speaking netizens found his pronunciation lacking.  Poor guy, but his voice is angelic anyway.

Fabulous Boys promises to be an enjoyable series.  Hopefully this set of actors will make the characters their own and bring something new into the much loved classic You're Beautiful scenes.