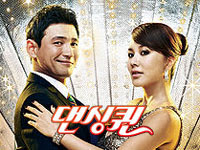 Dancing Queen starts off in classic fashion:  Boy Meets Girl, Girl Dislikes Boy, Girl Sees Boy's Pee Pee - wait, what?!  Okay, so that was a little left of "classic", but quite memorable.  I saw the film with my mother and days later she asked me which drama we were watching that had the little girl seeing the pee pee.  "That was Dancing Queen, not a drama." I said.  That scene may have been a little too distracting if the movie's message isn't what made it memorable, but nonetheless, it was very entertaining.

The child actors did a great job playing the haughty girl and the country bumpkin.  I would have actually liked to see more of their interaction, but they served to set things into motion.

Jumping ahead, the two meet again in a classic misunderstanding scenario.  Jung Hwa (played by Uhm Jung Hwa) confronts Jung Min (played by Hwang Jung Min) whom she thinks was groping her on the bus, while the real culprit sneaks away.

The police get involved and the couple finds out their childhood connection.  One thing leads to another, which leads to some misadventures, which somehow ends up in marriage.

It's at this point that stories usually end with the audience assuming that the newlyweds lived happily ever after.  In Dancing Queen, this is where the story truly begins.  They have a child and settle into jobs which don't make ends meet, take each other for granted, and live with disappointment.  Welcome to the real world.

Then as luck would have it, both fall into opportunities that ignite their spirits and motivate them to reach for their dreams.  Though their new goals conflict with each other, putting further strain on their marriage, the two must still be true to themselves.  They work hard in their separate endeavors, growing as individuals, but seeming to grow apart from each other.

Additionally, there are other people whose lives they have touched, who are depending on them to pull through.  Everything culminates in a very public scene that does not disappoint.

This is a humorous, touching and very relate-able film that will have you rooting for not just both main characters, but for the side characters as well.  It's demonstrates that though life may demand sacrifices, it's just as important to not give up on yourself as it is to not give up on others.  Whether dreams come true or not, striving for them is what makes life fulfilling.