Nine: Nine Travel Nine Times is extremely organized and smartly written. It has to be in order to keep track of itself as its protagonist repeatedly goes back in time to make changes. My main complaint is that it took four of its 20 episodes to set things up and get interesting. My minor complaint is that leading lady Jo Yoon Hee sported a middle school hairstyle that made it very hard to see her as part of a romantic couple. At some point I acclimated, but it took time.

Park Sun Woo (Lee Jin Wook) is an anchorman whose family is in shambles. His father died in a fire 20 years prior. Shortly after that, his mother went into a vegetative state and his brother, Park Jung Woo (Jun Noh Min), fell off track. The story is set into motion by Jung Woo, who is desperately trying to restore the family to how it once was.

Sun Woo travels to beautiful Nepal where coincidentally, reporter Joo Min Young is stationed. The first episode can be confusing. You see Jung Woo in one place, but he ends up in another with no explanation. It all makes perfect sense in the end, so just have faith.  Also, Sun Woo and Min Young's relationship is missing the typical push/pull tension or instant chemistry to make you care whether they're together or not. Never fear, the tension will be added in a twisted way that puts the "melo" in this drama.

In Nepal, Sun Woo acquires the means to travel back exactly 20 years, nine times, for 30 minutes each time. All changes take place in the same timeline, but instead of the previous events having never existed, history is rewritten over what has already happened before. Memories are still intact under the surface and accessible in the right circumstances.

Although I'm not a big fan of the splitscreen which is used extensively throughout the series, I did manage to accept that it's a throwback effect (we do travel back 20 years - although it feels more 70s than 90s) and get used to it somewhat.

Sun Woo always blamed Dr. Choi Jin Chul (Jung Dong Hwan) for his father's death and aims to bring him down. Jung Dong Hwan does a superb job as the villain, even in his unintentionally comical scenes. You never feel that he's at a disadvantage even though his adversary has the means to change his history.

Sun Woo kept his family's house, even though he now lives there alone. This was an essential point, since the house itself became a means of communicating with himself. There were many scenes in which the past and the present were shown to be happening at the same time, one affecting the other. In fact the past became self actualizing in a suspenseful way.

There were car chases, fight scenes, bloody altercations; enough action to keep us anxiously on our toes and open to the possibility that this might not all end well. After all, things never work out the way our hero expects them to.

Lee Seung Jun was perfect for the role of Sun Woo's best friend, Han Young Hoon.  He was all the right kind of supportive, worried, funny and dependable.

The younger versions of Sun Woo (Park Hyung Shik) and Young Hoon (Lee Yi Kyung) portrayed their close friendship in an equally gratifying way. The boys were proactive in trying to assure their future, and matched their present counterparts perfectly.

What is everyone looking at? Ah, there were a lot of funny faces in an otherwise serious drama. I just thought I'd throw some of them in here to pique your curiosity. 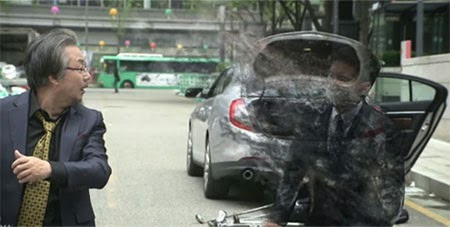 ﻿
﻿The special effects used were simple, but appropriate for the drama. Imagine new memories suddenly flooding your mind as your surroundings change as a result. What would it look like? I found the production's solution to be realistic.

There are definitely clever and unpredictable twists and turns throughout Nine: Time Travel Nine Times. The ending felt profound and satisfying. It was a little surprising after sitting through countless flashbacks as the drama progressed, that they didn't do a flashback montage at the drama's conclusion to help explain it. People may have gotten confused, since a recall of the first episode was required to make the connection at the end. I'd suggest just watching the opening scenes again for a refresher and it will all make sense. Overall, an intelligent, suspenseful drama worth watching.
Posted by Panda at 2:02 AM