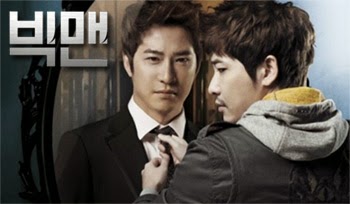 The synopsis for Big Man left me unimpressed. However, it's hard for me to pass up Kang Ji Hwan. He had me at Hong Gil Dong and I've been hoping to see him in a dynamic, satisfying role again. I did love him in Coffee House, but his talents really weren't utilized to the fullest in his last two dramas.

But again, the synopsis that seemed to tell the whole story, was still not interesting to me. Then I watched the first two episodes and got pulled in. Kang Ji Hwan does not disappoint, and his character, who is both badass and sweet, has a lot of potential for growth and inspiring others to grow as well.

Kang Ji Hwan plays Kim Ji Hyuk, an ex-thug in the process of clearing his name, as he's under suspicion for a crime he didn't commit. The police know him well, the criminals in town know him well, but he's really a nice guy.

Seriously, Ji Hyuk is thoughtful and caring to everyone. When his friend's father died without ever having gone on a trip abroad, he rushed over with balloons so that at least the ashes could take flight. These gestures have an impact on the people around him, and it will be interesting to see what kind of effect this will have in the new enviroment he will find himself in.

Kang Dong Suk (Daniel Choi) is the son of the very rich Kang Sung Wook (Uhm Hyo Sup), but he has a heart condition. He's a stark contrast to the rough and tumble orphan, Ji Hyuk.  Dong Suk winds up in the hospital in dire need of a heart transplant and the only way to bypass the waiting list is for a family member to donate a heart.

The rich family, of course, has access to all the medical records in town, and finds a match in Ji Hyuk. It's arranged for him to be added to the family and sent to the hospital in a brain dead state. However, he miraculously survives and the family is stuck with him, with reporters grabbing hold of the story of Sung Wook finding his lost son. Thus the scene is set.

Dong Suk's assistant, So Mi Ra (Lee Da Hee) is assigned to taking care of Ji Hyuk. In contrast to having to hide her relationship with Dong Suk from his disapproving parents, she feels comfortable in Ji Hyuk's world. Mi Ra is beautiful and poised. Working for the Kang family has made her efficient and guarded. She is the iceberg to Ji Hyuk's innocent goofball and it works.

After learning the circumstances in which Ji Hyuk became involved in the family, Mi Ra is tempted to kill him (when opportunities present themselves) in order to save Dong Suk, but seeing his warm personality, her heart is moved.  DramaWiki had me thinking she was an assassin or something; not the case.

﻿
Kang Jin Ah (Jung So Min), Dong Suk's little sister, has an almost leading lady chemistry with Ji Hyuk, and is suspicious about his connection to the family. Their scenes together are abrasive and charming, and there's potential for her to suffer from Second Leading Lady syndrome.

Sung Wook looks for another solution for Dong Suk, and tries to keep Ji Hyuk happy, while scheming to get rid of him quietly. Ji Hyuk, however, is smarter than he bargained for and things get complicated, especially since the media is watching them closely.

So far there has been foot chases, car chases, fist fights, scheming, medical emergencies, warmth, chemistry and intrigue. Big Man is off to a good start and I suspect its momentum will continue to build.
Posted by Panda at 1:06 PM