First Impressions:// You're All Surrounded

Four bumbling recruits led by Seo Pan Suk (Cha Seung Won) and his sidekick partner Lee Eung Do (Sung Ji Roo) sounds like a lot of fun. It turns out there's a lot going on in this drama, and it has all the right players, but for some reason my interest is lacking after the first two episodes.

We start off in the thick of a chase. A car flies through the air, pursued (somehow) by a minivan full of rookies being thrown around.

After the first altercation that demonstrates the comical dynamic of the investigative team, we are taken to the past. We learn about what motivates Eun Dae Goo (Lee Seung Ki), his history with Uh Soo Sun (Go Ah Ra) and his connection to Seo Pan Suk. It's a serious backstory; suspenseful and emotional, which is in stark contrast to episode two.

Ahn Do Gyu and Ji Woo gave compelling performances and were good matches for their older counterparts.

The couple with the most chemistry is Dae Goo and Pan Suk. Dae Goo's preconceived dislike of Pan Suk, and Pan Suk's erratic hot-headedness results in a rivalry that makes a contest out of things.

The team is a violent crimes unit working out of the Gangnam station. At times it's pandemonium with fangirls gushing over the recruits, other times personal issues are displayed for all to see.﻿

While the rookies try to look serious and cool, the fact is that they have no experience and can't seem to do anything right.

Even the dour Dae Goo with his eidetic memory is as incompetent as the rest. It leads to funny situations, but becomes repetitive and disappointing.﻿

Needless to say, the team gets scolded all the time. But the legendary Pan Suk doesn't seem to live up to his reputation either. It's a bit underwhelming to watch everyone mess up, not necessarily because of inexperience, but because of a lack of common sense or just plain stupidity. There's nothing clever or intriguing about either the comedy or police work, so it just feels mediocre. 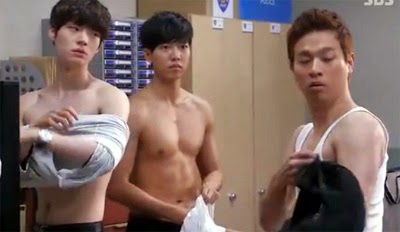 Not that there isn't anything good in this lukewarm drama. There are some funny moments and a bit of eye candy to gawk at here and there.

The drama's saving grace is that it isn't just a slapstick sitcom about a tempermental detective leading a group of hapless rookies. Iceberg Dae Goo's interest in Pan Suk will play a big part in the storyline. The other three recruits are likeable and lively, which is the only reason I might just end up giving episode three a chance.

Other players are adding layers to the plot as well. The new head of the missing persons department, Kim Sa Kyung (Oh Yoon Ah) has a painful history with Pak Sun and is unprofessional enough to let everyone know it. Captain Chae Tae Ho will be making things difficult for Pan Suk as well due to their clashing personalities. Former chief turned congressman, Yoo Moon Bae, seems to have some animosity toward the new chief, Kang Suk Soon (Seo Yi Sook), and a lot is riding on the rookie team's success because of it.

Although the side characters are not very interesting or dynamic (there is no chemistry at all with Sa Kyung - she's a barely contained lunatic and completely unlikeable), hopefully their contribution to the plot will add some dimension.

After the Abbey Road reference in episode one, I was hoping there would be more eggs hidden here and there, but it's seems to have been a one shot deal. I haven't seen anything else by writer Lee Jung Sun, but I as hoping for more since they won for Best Screenplay (Ojakgyo Family) at the 2011 KBS Drama Awards.

You're All Surrounded is one dimensional and lackluster despite having a great cast. More authenticity and a bit of wit would go a long way, but I don't see that happening in this series. Watch if you're a big fan of any of the leads or have time to kill, but don't expect anything of substance.
Posted by Panda at 1:36 AM