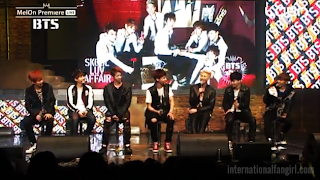 On Feb 11, 2014, one day before Bangtan Boys comeback with their new album Skool Luv Affair, I saw the live streaming of the MelOn performance on Loen's youtube. I will apologize in advance for the lack of screenies in this post.

At about 3am EST, there was a standby screen set for 2 hrs in counting. I set my alarm and slept for about a that long in order to make sure that I didn't miss this.
5am EST/ 7PM KST: My alarm goes off and I run to the computer to be greeted by images of BTS. Then the following played.
1. Skool luv affair album preview video
2. N.O MV
3. Boy In Luv TS
4. No More Dream
5. We Are Bulletproof Pt. 2
and repeated for another 2-3x...
After around the first showing of number 4, I realized it wasn't 8PM KST and they were building a hell of a lot of anticipation.

6AM EST/8PM KST: FINALLY!
The boys take the stage with a performance of their new song 'Jump' followed by a showing of their animated MV for their Skool Luv Affair Intro. VJ Yumdda was the host of the performance and then calls the boys out one by one to come to the stage and have a seat. (In order: J-Hope, V, Jimin, Suga, Rap Monster, Jin, and Jung Kook) This began a Q&A session. There was even a bulletin board filled with sticky notes that had questions written by the fans in attendance as they walked into the event space.

What is your favorite song on the album?

Rap Monster: 'Where you from', because I wrote an amazing bridge.
J-Hope: 'Just one day', because he felt most sincere writing the lyrics.
Jin: 'Just one day', fit his feelings and his voice sounds great with it.
V: 'Cipher' because the rappers were amazing.
Jung Kook: 'Cipher'. He says his hyungs did very well on that song.
Jimin: 'Boy In luv', since its title song.
Suga: 'Tomorrow', because wrote the melody and beat when he was a trainee.
'Jump' was produced by Suga around that time. J-Hope and Rap Monster are also listed on the album for writing and producing.

When asked about abs, Jimin says he would show them but since its 19+ content, A.R.M.Ys have to wait til they are old enough. 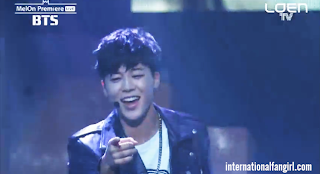 He did try to pass it off to V, where I was too lost to hear the words coming out of Tae-Tae's mouth. (And the fact that the translations were so lagged and in some parts nonexistent, didn't help me understand anything either. But I still watched attentively.) But Jimin, really? Who hasn't seen your abs? You have been showing them off since day one. Maybe the chocolate melted? 555. Jin did tease as if he was going to show how much he worked on his body lately, but disappointedly stood up, pretended to lift his shirt then blushed, shaking his hand 'NO' to the screaming girls in the audience. He shyly smiled and covering his face, returned to his seat. 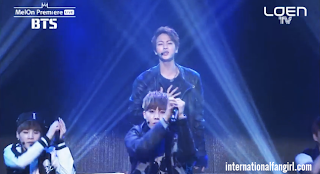 After this the Boy In Luv TS was shown. Jin explains about his shoving scene with the female lead. (Which I will post in the MV Breakdown.)

They perform, Just one day and after ask the crowd how they liked the song. Suga asked for more reassurance after the crowd said yes. "Are you sure, do you really mean it/like it?" To which the crowd responded with a loud "Ne/Yes". 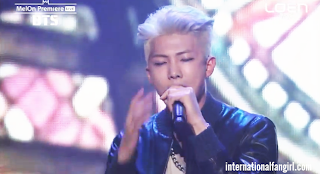 After the Boy In Luv Performance , Bangtan explains they don't have a "Point" in the choreography and ask the crowd what they felt the main point of the dance was. Few yells later, V comes out to demonstrate his strong dance moves, and settles on this being the main point of choreography.

Rap Monster explains that they also prepared to perform 'No More Dream' and 'N.O'. As the lights cut off for the boys to start their performances, a congratulatory song is sung and a surprise bday cake for J-Hope appears. During all the excitement V blew out the candles so they have to relight it for him. In V's defense...they should have sang Happy birthday. The song of Congratulations~ Congratulations~ could have confused anyone. It could have been a cake to congratulate them on their comeback, right? I'm sure A.R.M.Y's knew.

They preformed No More Dream, and N.O as promised. Then some backstage MV footage and practice footage was shown as well. 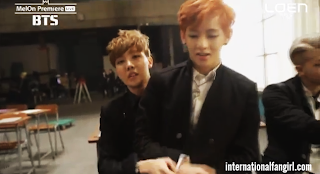 At the end, they showed the Boy In Luv MV, which I have been dying to see, especially after all the charismatic aura from the TS released on the 10th. Of course, I will write a MV Breakdown on it. Bangtan thanked everyone, Fans, VJ, Staff, everyone...for their support and promised to work hard.

Despite J-Hope being hospitalized for falling ill/exhaustion, Suga having an appendectomy, and the rest of the boys running around and working hard while preparing for this album as well as promoting Attack On Bangtan, they seemed very lively, fun and attractive on stage.It was great to see Bangtan comeback, and I can't wait to get the album. They have always had an awesome performance presence and what V called "Heavy Choreo". I wonder if they will be on Weekly Idol (EDIT: They will be on Weekly Idol Feb. 26, 2014.) or Running Man soon. Wouldn't that be great fellow A.R.M.Ys?