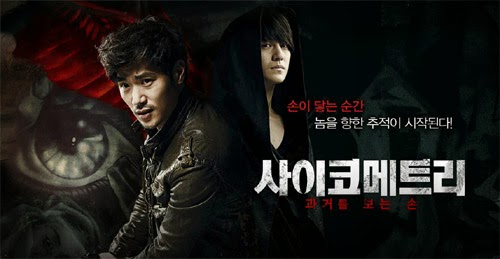 Psychometry is the ability to divine information through touch. An intriguing element when a detective is desperately trying to find a young victim of abduction, and his only hope of saving her is a graffiti artist who paints crime scenes based on what he has sensed through his gifted hands.

I stumbled upon this thriller while following the cutie patootie, Kim Yoo Bin. Then I noticed Kim Bum was in it and was officially in heaven! You know, the Kim Bum from Boys Over Flowers, Padam Padam, That Winter, The Wind Blows - that sweet sexy flower boy!...... What was I doing?  Oh right, the review!

We jump right into establishing the ridiculous detective, Yang Choon Dong, played by Kim Kang Woo of Haeundae Lovers. He reminds me of Yoo Joon Sang of Birth Secret, but not so extreme. Detective Yang Choon Dong has the worst performance record in his department, and he focuses more on making money on the side, than on his actual job.

When he finally wants to step up for a case he cares about, Choon Dong clashes with detective Chul Hyun, played by Park Sung Woong. The two actors did create an effective atmosphere of conflict, but there wasn't enough of it, and then it was left as a loose string with no closure.

Kim Bum plays Kim Joon, a troubled man whose experiences have led him to consider his gift a curse. He has isolated himself, but is compelled to share what he sees though his art.

Choon Dong also struggles with his past and the case of a missing child hits him where he's most vulnerable. When he realizes he's seen his crime scene depicted on a wall before it ever happened, he puts two and two together.

Choon Dong and Kim Joon's relationship progresses from suspicion to bromance, and they do have chemistry together, I just wish it could have been explored more. However, their connection is the most meaningful part of the movie, and through it we learn what has made them who they are. We see them at their weakest, and at their strongest. In the end, I'm left wondering if they really developed and changed after their experiences together. It seems to be left open as a possibility.

Kim Yoo Bin plays Da Hee, the latest girl to go missing at the hands of a serial killer. The most suspenseful scenes involve her abduction and she gives an impressive performance. From her posture, to her expressions and the look of terror she achieves in her eyes, Yoo Bin proves that she can play all genres.

Lee Joon Hyuk plays Yang Soo, Choon Dong's ex-criminal sidekick. Though the role could have been extraneous, he brought life and humor to the plot. Along with Kim Joon, the three men manage to get some police work done and you can just see them being a comical/dramatic team in many cases to come. There is great potential for the development of an awesome bromantic triangle!

Park Hyuk Kwon gives a chilling performance as the villainous Ki Woo. He's so good at playing the nice guy, that seeing him in this role gave my system a shock. His dark side is terrifying, which of course, makes the film all the more satisfying.

Although the police procedure was complete fantasy, the lack of consequences totally unrealistic, and a couple loose threads were left untied, Psychometry was entertaining enough to be enjoyable. The cinematography, direction and acting were all well done, and the film ended on a touching note.