Nodame dreams that she is playing Rachmaninoff's Piano Concerto No. 2. Strezemann tells her it was a strange rendition, but interesting. However, it won't work with an orchestra. Nodame asks him to help her to be able to perform a concerto with an orchestra too (like Chiaki did). He tells her that she has to face music head-on, otherwise she won't be able to enjoy music from her heart. Nodame insists that she is enjoying the music.

Chiaki wakes up in a hotel room full of sleeping women. He recalls that Strezemann dragged him to Ginza, Kyoto and an onsen (a hot spring resort) for three days and nights. Then it was drinking again in Rappongi the night before.

Elise is still there to pay the bills after sending Strezemann off to the airport. She gives Chiaki a message from the maestro and he expects some meaningful words. However, the letter asks him to send Mami Nagaoka's photo book to Germany when it is released that December.

Chiaki asks Elise to express his gratitude to Strezemann. She thanks Chiaki as well, for it had been awhile since she had seen the maestro conducting so happily.

Mine hears the S-Oke members talk about how fun it was to be in the orchestra, and someone suggests having a disband party. Mine interrupts and says he has no intention of ending it. Sakura agrees; she still wants to play. Everyone likes the idea of continuing with S-Oke, however, several members have to leave for interviews and meetings.

When Chiaki arrives, Mine tells him that he was moved by his performance and declares him his best friend. Chiaki brushes him off. Sakura informs Chiaki that Nodame hasn't been in school since the festival.

Chiaki meets with Kawano and Sakuma from Classic Life. They are surpised when Mine's father accepts his order of a club sandwich and espresso, this being a Chinese restaurant. Sakuma introduces himself as a music critic. Kawano shows Chiaki the Classic Life article featuring himself and Strezemann, and Chiaki is dismayed at the extra large pin-ups that are included.

Sakuma (with Kawano translating his passionate poetic speech) asks Chiaki why he doesn't study abroad as he'd do so well in overseas competitions. Chiaki gets upset thinking about his fear of traveling by air and sea, and leaves abruptly after telling Mine's father he'll pick up the food later. Kawano wonders if perhaps Sakuma's speech pattern offended him.

At practice, Saiko's teacher points out that she's hit a roadblock and needs to learn to sing out with rich emotion like Suganuma, who watches smugly from the audience. Saiko is horrified. 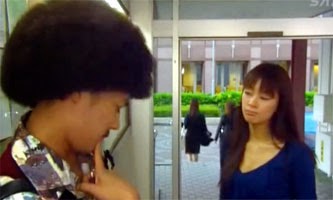 Kiyora finds Masumi at the bulletin board looking for timpanist openings, of which there are none. She asks him if he knows what Chiaki is planning on doing.

Mine's father comes to the academy with Chiaki's food to ask his son to deliver it. Saiko jumps in and forcefully volunteers.

Chiaki sits at the bar and broods over the fact that he's still stuck in the same place, trapped by his fear.

When Chiaki returns home, he finds Saiko waiting in front of his apartment. Nodame can be heard next door, feverishly playing her piano as she contemplates Strezemann's words; as things stand now, she can't be with Chiaki.

Saiko claims that Mine and his father asked her to deliver the food so she really had no choice but to come over. Looking on Chiaki affectionately, she gives praise for his performance of Rachmaninoff. Chiaki tells her that her technique has improved a lot in the last four years, but her lack of performing skills makes everything she sings sound the same and it's boring. He says that if she lets out some of her bitchiness, her singing might gain some breadth. Now she remembers that he can be a jerk.

Chiaki leaves to go to the convenience store and pauses outside of Nodame's door for a moment.

Saiko goes into Chiaki's bedroom and pulls out their high school yearbook. She reflects on how his focus was always on music, not on her, and how he hasn't changed a bit. She wonders if they would get along at all if she quit music.

When Chiaki returns, he finds Nodame in his apartment. She tells him she's been practicing Rachmaninoff since the festival and begs him to let her play a concerto with an orchestra. He tells her that she stinks and sends her to the bathroom. Saiko peeks from the bedroom and resents Nodame with sinister force.

Chiaki tries to feed Nodame, but she has no appetite. He tells her that she can't play with an orchestra because she never looks at the score and composes as she goes along. She's still insistent, so he takes her to the school where they can sit at two pianos, to hear her play.

Nodame begins Rachmaninoff's Piano Concerto No. 2 and Chiaki plays accompaniment. Maki and Reina hear them and peek in through the window. Chiaki notes that Nodame plays by impulse, changing the tempo, adding notes, composing at her will. He wonders if he should stop her now, but decides to just play along. By now a crowd, including Saiko, has gathered outside attracting Eto's attention.

Everyone is amazed by the performance. The girls wonder if Chiaki and Nodame are dating; they are always together, and though Nodame's playing is sloppy, they are perfectly in tune. Saiko is shaken and leaves.

The next day, Chiaki gives Nodame a score and CD so she can start studying the concerto. Nodame says she already got to perform the concerto because Chiaki's piano was just like an orchestra. Chiaki asks if she was really satisfied with that performance.

They are interrupted when members of S-Oke rush up to them with various news from the seniors. Many have gotten jobs and plan to take lessons in their free time in hopes of having a professional debut someday. Shizuka reveals that she's getting married.  Sakura tells Mine that she's happy for them, but the ones that are left will be lonely.

Nodame wants to get married like Shizuka, and Chiaki tells her to marry someone from her own planet. That doesn't discourage her and she's happy that Chiaki will be staying to go to graduate school instead of going abroad or returning to his hometown and leaving her. This reminds Chiaki that he's trapped and he gets depressed. Mine arrives and tries to talk Chiaki into conducting S-Oke, but he rejects the idea.

Chiaki does chaotic depressed shopping for their dinner. When he grabs canned kangaroo meat, Nodame stops him and offers to treat him to dinner. They go to a rotating sushi restaurant and Chiaki doesn't understand why the food is going around in circles. Nodame grabs cheap egg sushi, but Chiaki keeps choosing the expensive gold plates and eating only the toppings, leaving the rice.

Nodame scolds Chiaki for having no sense, but he points out that he paid for the meal in the end since Nodame had brought only 3000 yen (about $28). She maintains that it's usually enough for rotating sushi, and was only trying to do something nice since he was acting so strange. Chiaki wonders why everyone, even Nodame, is worrying about him.

Chiaki tells her that she's not in the position of worrying about other people and asks her what she plans to do in the future. She affrims that she will teach kindergarten and will be busy with student teaching while she's a senior. Chiaki says that even though she's sloppy, she's good at the piano and asks why she's not aiming higher. This reminds him of all the people who have been asking him why he isn't going abroad and realizes that everyone must look at him the way he looks at Nodame. Nodame wonders if Chiaki is ill.

The next day, Kiyora asks to speak to Chiaki. Mine and Nodame try their best to spy. Kiyora reveals that she will stay in Japan and attend graduate school while her teacher in Vienna is on tour. She also wants to create an orchestra with Chiaki. She has already gathered some of the best players, and if Chiaki invites others, they will come. Afterall, he's a superstar now since being featured in the Dream Color Classic column.

After Kiyora leaves, Mine jumps out and asks to join Chiaki's orchestra. Chiaki tells him that if he gets into A-Oke on his next exam, then he'll be accepted.

Mine offers a toast to the peple who found jobs, and to the disbanding of S-Oke. Tamaki takes a drink to give himself the courage to ask Kaoru out, but when he looks up, she's with the rest of the girls crowding around Chiaki.

Tamaki decides to get revenge at karaoke and requests Chijou no Hoshi (Stars from Above by Nakajima Miyuki) for Chiaki to sing. Chiaki is taken aback, but knows the song, and just as he's poised to start, Ookouchi grabs the microphone and declares this his theme song.

Meanwhile in a smaller room, Saiko sings out her depression. Her frightened friends agree that it seems she's gotten past her roadblock. 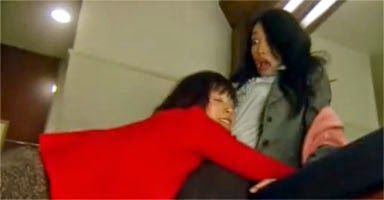 Saiko sees a drunken Nodame in the restroom and knocks her to the floor when she doesn't address her properly. In return, Nodame hugs Saiko, telling her that she smells good. Saiko admits that Chiaki has a soft spot for this type of girl.

Meanwhile, the gang is taking pictures with Chiaki.

Still intent on making a fool of Chiaki to lessen the infatuation of the girls, Tamaki and Hayakawa get him to play a taiko drum game in front of everyone. They choose Chijou no Hoshi again and Chiaki is confident he knows it, but Ookouchi comes along to claim his theme song. However, Masumi pushes him out of the way and announces that all percussions are his. He takes over, praying that Chiaki listens to the four year accumulation of his love that he will pour into this song. Everyone cheers after he's done, but are confused when he runs off full of emotion.

Masumi is certain that now he's graduated from S-Oke and Chiaki. As he cries by himself, he's surprised when Chiaki taps him on the shoulder and asks if he would join his new orchestra. Of course he says yes, and the whole gang rushes over cheering. Mine tells Sakura to practice so they can get into A-Oke together (and ultimately Chiaki's orchestra).

After everyone parts ways, Chiaki tells Nodame that he wants to go another karaoke and arcade because no one let him do anything all night. Hayakawa and Tamaki are dismayed to find the Suzuki sisters crying because Chiaki wouldn't let them join his orchestra.

Chiaki tells Nodame that he rejected people from S-Oke who wanted to be in the new orchestra. But he wants to make the best orchestra possible and not an extension of S-Oke. He recalls his memories with them and acknowledges that those experiences were really special and made an impace on him.

The following morning, the students Kiyora invited arrive; Kuroki Yasunori (oboe), Kikuchi Tooru (cello) and Kimura Tomohito (violin). Kiyora and Chiaki sit down with them to discuss people they want to include in the new orchestra.

Nodame is surprised when Etoh arrives instead of Tanioka, and informs her that he will be teaching her from now on.