Chiaki recalls how being raised in a family of musicians and having a famous pianist father, afforded him access to performances all over the world. It was when he saw Sebastian Vieira, though, that he became engrossed in music.

One day, a dropped tamagotchi bonded them together and Vieira soon became his teacher. When Chiaki's parents divorced, he returned to Japan with his mother. He promised Vieira that he would come back to be his pupil when he grew up. Vieira declared him already his pupil.

Ten years later, Chiaki resentfully remains in Japan. Stranded by fear due to a traumatic emergency landing he experienced as a child.

As Chiaki walks through the Momogaoka Music Academy's campus, he hears various students practicing and judges them all to be no good. Reina and Maki, along with a myriad of female students notice him from the windows, as Masumi tells fangirls to mind their manners.  Mine's bandmates remark that Chiaki is the elite professor Eto's favorite.  Mine proclaims him a shadow of his father.

Maki turns away from the window to eat her limited edition box lunch, but finds it's been raided, with the guilty Nodame making her escape.

Chiaki sees that Hayakawa is going to study abroad and becomes even more frustrated with himself.

Professor Eto arrives while Chiaki is practicing and whacks him with his fan. He has entered Chiaki in the Maradona competition and won't have him smear his reputation. Eto sees Chiaki's score and asks him if he wants to be a conductor when he can't even play the piano right.
Chiaki snaps and tells Professor Eto that if he had recognized his talent, he wouldn't be trying to teach him unnecessary things.  Eto drops him as his student and informs him that he'll be finding someone else for the competition.

As he heads home, Chiaki hears someone playing Beethoven's Pathetique. He realizes that it's sloppy, but not wrong. In fact, it's wonderful. He runs up to the practice rooms and sees Nodame playing from the back. Just as he's about to open the door, Saiko stops him to find out if he was really dropped by Professor Eto.

They go to a bar where Saiko urges him to apologize and prepare for graduate school. Chiaki isn't interested. He wants to be a conductor and learn only from Vieira. Saiko tells him to hurry and study abroad if that's the case. She chides him for being afraid of flying because of one emergency landing, and not being able to travel by sea because of one near drowning.  Chiaki gets agitated because she doesn't understand. He considers quitting music. Afterall, even if he studies in Japan and becomes a conductor, there's no point if he can't perform in Europe.  He might as well work for Saiko's family's music company.
Saiko has heard enough and gets up. Chiaki grabs her arm and asks her not to go home, but she tells him that she hates losers and leaves.

Nodame finds an unconcious Chiaki sitting outside his door, which incidentally is right next to her's. He asks for help in his sleep and she gently blows in his ear. Chiaki thinks he hears the sound of wind in his bright drunken dream.

Chiaki hears beautiful piano music in his dream. When he wakes up in Nodame's messy apartment, he's horrified by the filth. Nodame calls him senpai (senior from the same school or work) and asks if he remembers what happened the night before.

Chiaki panics and runs out to discover that they live right next door to each other. He rushes to take a shower and finds that his belt is missing.

At school, Nodame approaches Chiaki to return his belt in front of curious onlookers. He denies that the belt is his, and when Nodame persists in returning it to him, he throws it into a tree. Nodame retrieves it and tells Maki and Reina about finding Chiaki outside of her apartment. When she tells them that he asked for her help, they think she's making it all up. 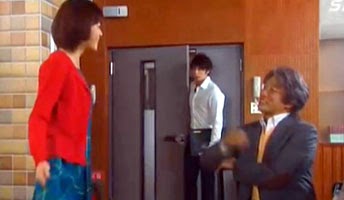 Chiaki's new teacher turns out to be Professor Tanioka. When he arrives for class, he finds Tanioka and Nodame engaged in lively conversation replete with fart sounds (from Nodame). Chiaki turns away, saying that he has the wrong room, but Tanioka stops him. Now that he has Chiaki, he can no longer be called the teacher of the dropouts.

Miki Kiyora, the concert master of Orchestra A (A-Oke), leads the members in tuning. Professor Eto brings in Kawano, an editor of Classic Life magazine, to see the elite orchestra and invite her to their public performance the following month. He introduces her to the chairwoman who feels that A-Oke is missing life. Originally the aim of the orchestra was to find talent before it's buried due to a lack of opportunity and she still wants to do something like that.

Tanioka starts Chiaki off with a duet lesson with Nodame. Chiaki is frustrated with Nodame's sloppy playing. Tanioka explains that Nodame has good ears and memorizes the music, so she's not used to looking at the score while practicing. Also, she hates practicing.

Chiaki sees Saiko who seems to wave at him, but then runs right past him to join Hayakawa.

Upset, Chiaki has a tantrum at home, then goes out on the balconey for a smoke. He smells garbage and sees that it's coming from the balconey next door. Then he notices the purple goo that is oozing over to his side along with a swarm of bugs.

Chiaki runs over and cleans Nodame's apartment. In thanks, Nodame cooks him mackerel, but it turns out completely black. Chiaki takes over in the kitchen and presents an overjoyed Nodame with meringue a la panna con i broccoli.

The following day, a strange man compliments the food at Uraken, Mine's father's Chinese restaurant. He accompanies Mine to the academy, then disappears to photograph students who catch his attention.

Chiaki gets to the practice room early and reads about the duet they are learning; the only two piano piece that Mozart ever composed. It's a cheerful score that he composed so that he could play it with a friend's talented daughter. Tanioka arrives, but Nodame is late, so he suggests that Chiaki get some tea.
Outside, Chiaki  runs into Ookouchi Mamoru, self proclaimed second most famous in the conducting department, and Hayakawa. Hayakawa tells him that he's thinking of auditioning for Gerharm, the seminar that Vieira will be teaching. He asks if Chiaki would like him to convey a message for him. Chiaki gets frustrated and doesn't return to class.

Nodame practices by herself, catching the attention of the mysterious man. After class, he introduces himself as Milch Holstein (Cow's Milk in German) and offers to buy Nodame dinner. Worried about Chiaki, she suggests that they all have dinner together.
Chiaki is annoyed when Nodame brings a stranger to his apartment. Milch wants to hear him play the piano, then notices the photo of Chiaki with Vieira. Chiaki snatches the photo away, saying that Vieira is his conducting teacher.

Milch decides to take Nodame to the sushi restaurant at his hotel. To stop her from leaving, Chiaki promises to let her practice with him. Milch tells her that he'll teach her something better, and that his bed has fluffy, fluffy pillows. Chiaki says that he has a bed too and offers his arm pillow which Nodame can't resist.

Chiaki throws Milch out only to find Nodame waiting for him in his bed. He kicks her and tells her to leave. 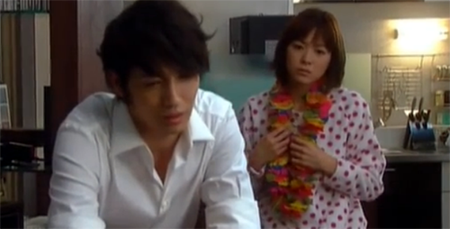 Nodame promises to be good and practice, then spots his conducting book on the floor. She tells Chiaki that she wants to see him conduct soon. Chiaki says that no matter how hard he studies, and no matter how good he is, he's still losing to "that ham" (meaning Hayakawa). He's only watching orchestras from afar. Chiaki says that he doesn't want to do it, and Nodame doesn't want to practice, so they shouldn't force themselves. He plans to tell Tanioka that he's not good enough to tutor.

Chiaki is awakened by Nodame's playing. He goes over to her apartment to find that it has reverted back to being a complete mess again. Nodame tells him that she still needs a week to memorize the piece, so Chiaki plays it for her to speed up the process. They begin practicing in earnest at home and at school. Chiaki scolds Nodame so much that he realizes he's acting just like Professor Eto.

During a practice session, Chiaki notices a stench coming from Nodame. She explains that she bathes every other day and shampoos every three days. Chiaki washes her hair by force. While drying her hair, he comes to the realization that she's a lot like Vieira.

Nodame enjoys feeling pampered, but Chiaki shares his vision that it's more like he's grooming a dog.

Professor Tanioka points out that Nodame is looking at the score. Chiaki notices that she's stressed and tells her to play freely. As they go through the piece, he compensates for Nodame's habits. He remembers something Vieira had once told him - There is very little chance that you can be happy every single day of your life. But for me, far more important, is to be called "Maestro", is to make the performances that take the people by the heart. Chiaki had dreamt of it, but had given up on it until yesterday. He notices that his body is tingling and they finish the piece to Tanioka's approval.

Tanioka relates that Mozart had composed the duet for a friend's daughter, but perhaps his real objective was to recall how to purely enjoy music by playing with her. Then he adds that it looks as though Chiaki has gotten over his slump. Chiaki realizes that the whole exercise had been more for his benefit, than Nodame's.

Nodame tells Chiaki that she wants to jump on his back; could this be falling in love? Chiaki says absolutely not, and although it went well that day, she would have to play according to the score during competitions. Nodame tells him that she'll never play in competitions. Chiaki wonders why she's even at the academy if that's the case. Nodame reveals that her dream is to become a kindergarten teacher.
Chiaki reflects on the fact that there are amazing people in Japan and that there's more for him to do there. He decides to transfer to the conducting department just as news sweeps the campus that the famous maestro, Franz Strezemann, has come to the school.

Students rush to the office to catch a glimpse of Strezemann. Chiaki and Mine are stunned to see that it's the weird old man. When they compare him to his picture in the magazine, he looks completely different and they wonder if he's not an imposter.

Strezemann wants to create an orchestra out of students he personally selected, in addition to keeping his agreement to teach and conduct A-Oke. He shows the staff the pictures of the students he hand-picked, but accidently displays his collection of naughty photos. When he spreads the correct images on the table, Mine and Nodame are included.
Episode 2
Posted by Panda at 5:47 PM