It's been a week since S-Oke's triumphant performance. Nodame uses Chiaki's internet because her phone has been cut off again. Chiaki tells her it's time to go to school, but when she opens her umbrella, it's full of holes. Chiaki coldly walks off, refusing to share his umbrella and Nodame chases after him.

At school, it's the season of festivals. Mine suggests that S-Oke participate as a costume orchestra. Chiaki asks why it has to involve costumes, but no one listens to him. More members join the conversation and the idea builds momentum.

Strezemann arrives and invites everyone to a group date, but the members call him a dirty old man. Strezemann feints going home, then holds onto Chiaki, telling everyone who wants to go on a group date to grab his chest. The girls form a mob much to Nodame's dismay. Mine wonders if Strezemann is an imposter.

Chiaki escapes the mob somehow and informs Mine that he can tell that Strezemann is real by his conducting. Meanwhile, the maestro has convinced everyone to go on the date, and that Chiaki will be joining them later. He's interrupted by a call from the scary Elise.

At home, Chiaki prepares pasta in crema di scampi et camberi for Nodame. While she's eating, he decides to look online to see if there are any stories about Strezemann being in Japan. He is shocked when he discovers that Nodame has changed his screensaver to her looping profession of love. Chiaki tapes her up in a blanket and proceeds to find a news story about Strezemann having gone missing the previous month and sought after by authoriies.

Elise shows up to the academy with the police and captures Strezemann. When Chiaki asks how she knew the maestro would be at the school, she shows him a photo that Strezemann has always treasured of his college friend, Minako Momodaira; she's also the chairwoman of the academy.

The students wave goodbye as Strezemann is taken away. Chiaki is disappointed that he has lost another teacher.

The group reflects that they haven't seen the chairwoman lately. Mine's father tells them that she's been on an extended business trip. He remembers that she had played the piano and once been considered the Jewel of the Orient.

Strezemann appears the Uraken's doorway with a bloody nose. He hands Chiaki his next assignment; to study Rachmaninoff's Piano Concerto No. 2. He tells him to resign from S-Oke and play the piano with A-Oke for the festival. 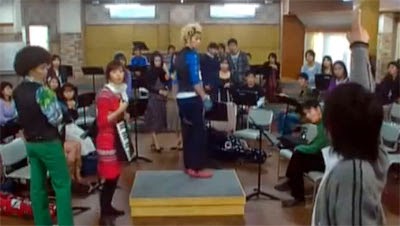 S-Oke is disappointed over chiaki's resignation, but when the girls find out what piece he'll be playing, they get excited. Mine insists that S-Oke will still play, and Ookouchi volunteers to conduct, though none of the members remember who he is.

Kiyori welcomes Chiaki to A-Oke and tells him that Strezemann has suddenly gotten serious. Chiaki sees him, and asks him why he has to play the piano (instead of conduct), but Strezemann is distracted by the arrival of the chairwoman. They embrace, happy to see each other after so long.

Strezemann invites her to see A-Oke's performance, and she says that Rachmaninoff's Piano Concerto No. 2 is her favorite piece. Chiaki realizes he's being used so Strezemann can show off for the chairwoman.

S-Oke gets excited about their costumes and the score they will be playing. Nodame is sad that she can't play the piano with them, so Mine suggests that she play the pianica. They decide to practice all night, but Nodame worries about Chiaki and dinner.

Chiaki slams the score down and wonders what is wrong with Strezemann, making him play piano for the festival. Elise shows up and asks why he's angry, then confirms that he's indeed Strezemann's student.

Nodame looks for Chiaki. She tells Strezemann that she really wants to tell Chiaki that she's participating in the festival as well.

Elise tells Chiaki that Strezemann played the piano in college, but always played hooky and chased women. But one day, the madonna of the academy, Minako Momodaira, told him that he had amazing talent and should be a conductor. Franz fell in love with her. She was beautiful and talented, and on the verge of becoming a celebrity, so Franz studied furiously to catch up with her. However, Minako contracted a disease that affected her hands and ended her musical career. She returned to Japan, leaving Strezemann with a pocketwatch.

Elise says they might have stayed together were she able to continue with the piano. As it was, they remained friends both then and now. Chiaki believes that Strezemann came to Japan because he still loves Minako, but Elise explains that Minako had asked the maestro to come as a teacher for Chiaki. She goes on to say that it's unheard of for Strezemann to take on a pupil, so if Chiaki isn't serious, he should return Strezemann to her because it's hurting the business for him to stay in Japan. 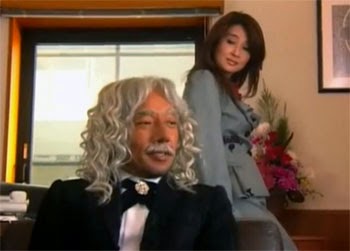 The chairwoman tells Strezemann that Chiaki can't leave Japan and wonders if anything can be done for him. Strezemann admits that he was going to leave after having fun, but now can't. And there's another student who reminds him of his past self who worries him. He would be happy if something interesting happened between the two students.

Chiaki thinks about the Rachmaninoff piece while practicing. It was the first concerto that Rachmaninoff wrote after overcoming a serious mental disorder. The piece starts off in a depressed mood, but in the end it vocalizes the joy of living. Nodame watches from the door, however, she gets dragged off to S-Oke practice before she can speak with Chiaki.

Late that night, Chiaki imagines that Nodame is waiting at home for dinner, possibly even crying. That fantasy is dashed when she rushes up to tell him that she will be coming home late due to the festival preparations, so he'll have to have dinner alone. Chiaki is angry that she stole his line and leaves, telling her not to come over anymore.

At A-Oke practice, Kiyora is impressed with Chiaki's playing, but Strezeman stops everything to correct him. He tells Chiaki to use his whole body to express the music. When Chiaki says it's not his style, the maestro insists that he doesn't know himself and that showmanship is an important point to learn; he needs to immerse himself in the music. Strezemann won't accept mediocrity. Chiaki understands that learning from, and performing with Strezemann is a wonderful experience, so he practices diligently.

S-Oke works hard on their costumes. Mine leaves his design to one of his fans, but when he receives the concept sketches, he's dismayed that none of them are human. Masumi laughs and points out that since it's their last performance together, they should have a ball. The fourth year students will be leaving and now have to seriously think about their futures. They are all sad that Chiaki won't be with them. 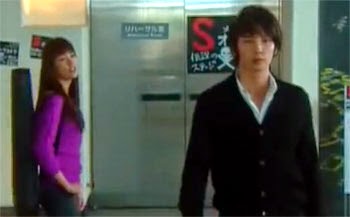 Kiyori finds Chiaki in front of S-Oke's practice room and guesses that he's worried about them. He denies it, but she suggests that he offers them some advice. Just then, they hear S-Oke cheering, vowing to beat A-Oke and Chiaki. Kiyora remarks that they're all fired up.

The school's office is overrun with phone calls about the great Strezemann and Chiaki's upcoming performance.

The students are excited to see Chiaki featured in Classic Life magazine. Suganuma shows Saiko the magazine and asks if she doesn't regret breaking up with Chiaki now. Meanwhile, editor Kawano calls upon a guest to accompany her to the music festival.

S-Oke shows up in traditional costume. When Masumi sees them, he's upset that he's the only one in a dress. The other members remark that they had liked their own individual costumes, but Mine had changed the theme to traditional because he didn't like the designs his fans had made for him. Nodame shows up and everyone wonders what she is. She announces that she is a mongoose and shows them her habu snake. 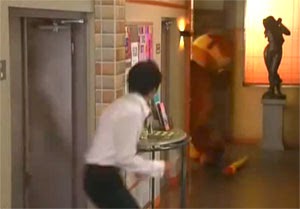 Chiaki practices, but doesn't understand how to incorporate Strezemann's corrections at all. He's distracted by someone slipping a ticket to S-Oke's performance under the door. When he runs out to the hall, he sees a mongoose just disappearing around the corner, dropping its snake, retrieving it, then making an escape.

Chiaki sits in the audience wondering how S-Oke will be without him and Strezemann. He's surprised when the spotlight illuminates the mongoose playing a pianica and recognizes that it's Nodame. When the lights come up, S-Oke plays Rhapsody in Blue in Big Band ala Japonaise style. Everyone dances and twirls their instruments as they give a lively performance. Chiaki realizes that it's a good arrangement with attention to detail, and now understands the concept of showmanship. He decides to trust in himself and give his own unique performance. 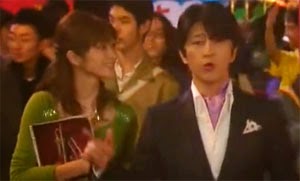 Kawano arrives with her guest who is skeptical about Chiaki's lack of competition experience. He insists that he won't write anything about a mere university festival.

Strezemann praises Nodame for S-Oke's performance and asks what her future hopes are. She reveals that her ultimates dream is to marry Chiaki and become a kindergarten teacher. Strezemann tells her that as things stand now, she can't be with Chiaki. He says she's done a lot for him and gives her a pocketwatch as a thank you gift. 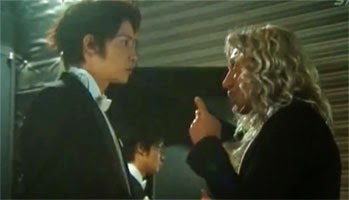 Strezeman finds Chiaki getting ready and suggests spiking his hair a bit and taking off his tie. Chiaki tells him that he'll perform in his own way. Strezemann agrees and tells him to forget what he said about showmanship; the important thing is how seriously he faces this piece. He mentions that he needs to show off for Minako because he will be leaving Japan for awhile.

Masumi rushes to tell Nodame that Chiaki's concert has already begun. She has no time to change out of her costume and rushes in to watch from the back wall. Chiaki gives an emotional performance and he thinks about how he doesn't want it to end. There is still so much he wanted to learn from Strezemann.

After the festival, Chiaki tells Strezemann to go easy on alcohol, cigarettes and women so he'll live a long life. Strezemann says that without those things, he'll die. Meanwhile, Saiko leaves the concert hall looking regretful. 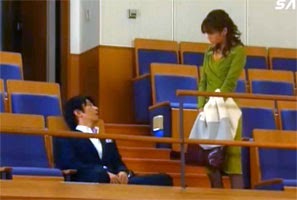 Kawano's mystery guest is Sakuma who writes the Dream Color Classics column. They are the last to leave the hall, Sakuma being impressed with the concert. He decides to change the content of his next column.

The members wonder if this is really the end of S-Oke. They talk of job hunting and future plans. 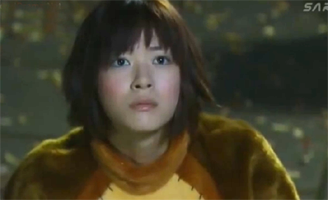 Nodame contemplates what Strezeman said about her not being able to stay with Chiaki. She suddenly feels an urgent need to play the piano and runs off to a practice room.
Posted by Panda at 10:46 PM