Ken (Tamamori Yuta) a modern day chef, suddenly finds himself in 1568, the volatile period in Japan's history when Oda Nobunaga was working towards the unification of Japan. As if that's not problematic enough, he has lost his personal memories. While he retains his cooking skills and knowledge of history, he doesn't know who he is, or how he slipped back in time.

Nobunaga no Chef is based on the ongoing manga written by Nishimura Mitsuru and illustrated by Kajikawa Takuro which began publication in 2011. Though the drama plot follows the same path, its divergent in the details, presumeably to include more action and intrigue right from the start, and to expand the role of the female lead. While the manga's story has more integrity, the live action is still entertaining, so I try not to compare the two too much.

Ken is thrown right into the thick of things as Oda Nobunaga (Oikawa Mitsuhiro) defeats a horde of soldiers in the street around him. The action throughout the episode is done well and Oikawa is very believable as the ruthless and autocratic Oda.

Ken gains help from the swordsmith, Natsu, who is masquerading as a man being that she lives alone. I'm not a big fan of Shida Mirai. She plays Natsu exactly as she played a high schooler in 2010's Hammer Session. I understand that she's not supposed to have any feminine charm in this role, but while her overly exaggerated facial expressions and silliness could work for an annoying teen girl, the same is not appropriate for a swordsmith in the Warring States period.

Though the events that led to Oda's retainment of Ken in the drama are not as natural as those that occured in the manga, the story is still believable knowing Oda's love of innovation would make him curious about Ken's wondrous cuisine. 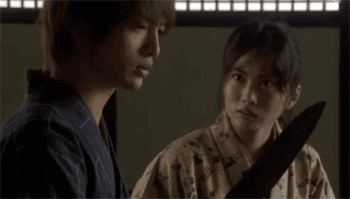 Ken realizes that his life is in danger and he must fight using his cooking skills. The situations he finds himself in are inconceivable to his modern mind, but he stands by his convictions.

... in part because the final products are beautiful and the tasting is satisfying to watch. Ken's mastery of cooking techniques, unheard of in that era of Japan, put him in good stead with Oda who realizes that Ken can be put to good use as more than just a personal chef.

That doesn't mean Ken has carte blanche, though. Being in close proximity to those in power brings danger from all directions. Tamamori Yuta expresses Ken's maturity well as he rises to meet each challenge and struggles to regain his memories.

Visually, the sets and establishing shots do ensconse the audience into the past authentically. I was hoping for a more epic feel similar to Jin, another time travel drama, but it seems that Nobunaga no Chef  has a lower budget with their limited locations. Nevertheless, it is still visually pleasing. 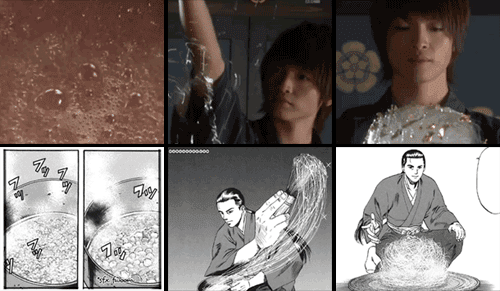 While it's best not to compare the storyline details of the manga and the live drama, if you have read the manga, it's fun to see how certain scenes are brought into motion. If you've been meaning to read the manga, I'd suggest waiting until after you've seen the drama since the manga is the more serious of the two.

The best thing about time travel dramas is getting to glimpse history and perhaps the fictional way our hero may have influenced events. Episode one features the meeting of Oda and the Portugese missionary, Luis Frois, who gifted him with a bottle of konpeito while seeking permission to spread  Christianity in Japan.

Other prominent figures that are established in the first episode are Kinoshita Tokichiro Hideyoshi (Goro) whom Oda refers to as Saru, and Akechi Mitsuhide (Inagaki Goro), one of Oda's vassals who later rebelled and brought upon his death. I'd suggest reading about them briefly. Brushing up on the history of the time may be spoilerish, but enhances the entertainment value overall. Stop rolling your eyes, Batzy-chan!
Ultimately, Nobunaga no Chef's entertainment value outweighs its faults and gives us two Johnny's boys as a bonus. It aired from January to March of 2013 and brought in a decent Kanto average rating of 10.8. On 10 July 2014, a two hour special will air in which Ken regains part of his memories and finds a way back to the present.﻿
Posted by Panda at 9:32 PM