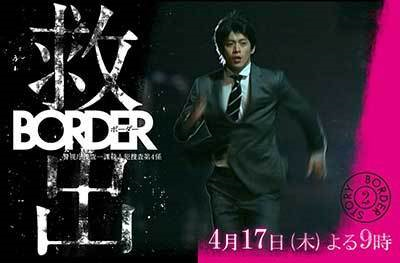 Although BORDER is listed as a mystery/suspense, it's more of a supernatural crime drama. It's dark with offbeat characters that stir your interest. The first episode seemed rather simple, but I gave it another shot and was glad I did. Though episodic, it seems that the cases will be varied, and there are a couple questions that I suspect will string us along until the end.

Ishikawa Ango (Oguri Shun) is a competent and ambitious detective with a serious personality. He has no personal life due to his career, and possibly his cold demeaner. The series starts with him hanging between life and death after being shot in the head.

Ishikawa recovers and gets back to work, but is surprised to find that he can see and communicate with the case's dead victims. The ghosts don't have a special appearance and it feels a bit like The Sixth Sense where ghosts appear as normal people.

Akai (Furuta Arata) is a mysterious underworld figure who does favors for a price, and is surprised when Ishikawa approaches him. Whether they have some significant connection is yet to be seen.

Higa Mika (Haru) is the coroner who works with such thoroughness that she seems like another detective. She's smart and serious, the female version of Ishikawa and they collaborate well. This being a Japanese drama, I don't expect any romance to develop, but it would be interesting to see if their composures would crack at all in a social situation.

A bit of comic relief is subtle and comes from quirky characters that Ishikawa interacts stonefaced with. His silent prolonged stare does, though, speak volumes, and you can't help but feel affection for him.

I was surprised at the outfits in the autopsy room and I wondered if they really wear those clear plastic getups in Japan. Although the police work doesn't always feel authentic, it does follow a logical progression and moves the story along smoothly. 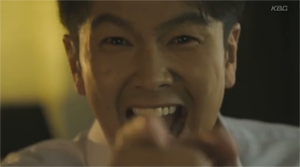 After the first episode, I was afraid that Ishikawa would just go around being helped by ghosts, and his main challenge would be to find evidence to support what he already knew. However after watching episode two, I am reassured that the ghosts will be varied and can complicate matters.

Overall, my first impression of BORDER is that it's a low-key series with a bit of eccentricity to make things interesting, and definitely worth a try.
﻿
Posted by Panda at 1:43 AM