This 2009 Bollywood film starring Shahid Kapoor and Rani Mukerji has everything a gender bender loving fangirl could want. Confusion, hilarity, romance and beauty. Musicals are not my preference, but when the song and dance is done well, serves a purpose, and is entertaining, I can be won over. Dil Bole Hadippa definitely delivers.

Although I'll be including a lot of the establishing details, this won't be a recap, won't spoil the ending, and won't tell you how things got from point A to point B. There is a lot of charm and allure to this film that requires watching it yourself. A few details beforehand isn't going to hurt.

Our beautiful heroine is Veera Kaur (Rani Mukerji) who is the best cricket player in town. Unfortunately, the boys won't let her play, and there are no girl's teams in the area. 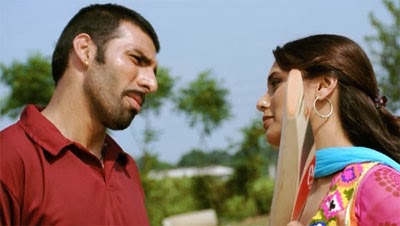 Nevertheless, she and her uncle are able to make a profit taking bets on her batting six sixes. A six is when the ball makes it over the boundary without touching the ground. But don't worry, there's no need to understand cricket in order to enjoy the film. The men take one look at a woman holding a cricket bat and gravely underestimate her.

The cricket team in the area is run by Vikram Singh who has an annual match with his friend from over the border to Pakistan, Liyaqat Ali Khan. They celebrate the independence of their two countries by having the match on August 14th (Pakistan's Independence Day) which culminates in fireworks at midnight on August 15th (India's Independence Day). The only problem is that India has not won once.

Vikram sends for his son, Rohan (Shahid Kapoor) who is a cricket player in England, to come and whip the Indian team into shape. Rohan first meets Veera after his car breaks down and he finds himself riding in the back of a truck with her and a black buffalo.

As with Korean dramas, the Fall and Catch is employed, but without the heart thumping realization of attraction.

No, these two are still at the stage of butting heads, but there is chemistry, no doubt. With their mixture of Hindi and English, her spitting sugar cane and still managing to look beautiful doing it, and their flinging of insults, the relationship is off to a sizzling start.

Tryouts are announced and Veera happily attends only to be turned down, threatened even, at the gate. No women allowed. 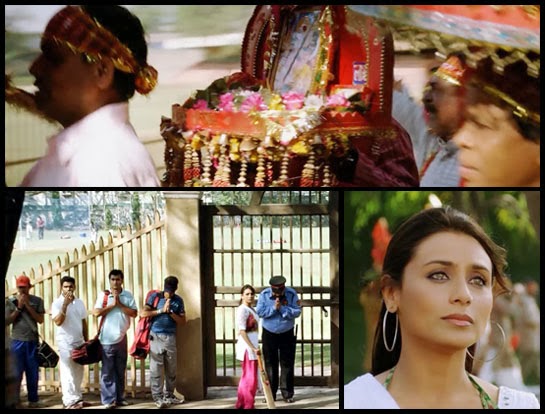 When worshipers pass calling out for prayers to the Divine Mother, all the men bow their heads. Veera sadly tells the guard, "She who you turn into an idol and worship, when she is human, you crush her. Shame."

Veera is a member of the Best Friend Dance Company that puts on theatrical performances. That night one of the male leads can't do his part and she fills in for him again. I have to admit that when I saw a screenshot of Rani Mukerji beforehand made up as a man, I thought there would be no way this could work. She is way too beautiful and feminine. It will be glaringly obvious that she's in disguise, and maybe a little disturbing with the facial hair. However, to her credit, she walks, talks, dances and has the attitude of a man so completely, that she had me convinced.

While taking off her makeup, Veera realizes that the only difference between her and cricket player, is gender.

Veera becomes Veer Pratap Singh and the same guard welcomes her into the park graciously. The only problem here is that they filmed her in a low angle shot which makes her bust quite apparent. Don't look there! 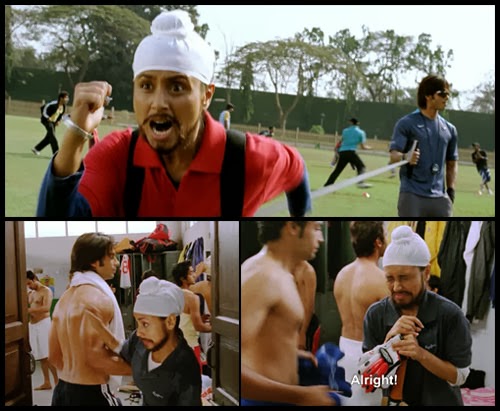 Veer's training regiment and locker room mishaps are wildly entertaining. How do they not know this 5'2" struggling man is a woman? You must see Veer hopping and dancing around and you will understand. Women just don't act like that. 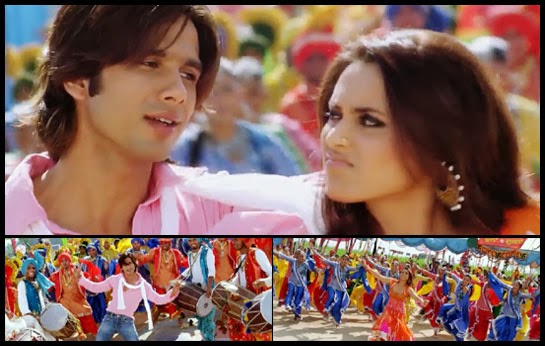 The Harvest Festival brings Rohan and Veera together again. Classic Bollywood singing and dancing are masterfully performed. The standard Boy Irritates Girl - Girl Snubs Boy is amusing as they bump into each other throughout the number. It was a fun way to show them get closer, as by the end of it they are dancing harmoniously together.

The photography of the film is outstanding from the gorgeous landscapes of the Punjab state to the colorful musical numbers and the dramatic closeups as well.

Things get complicated when Rohan talks to Veer about Veera. What could go wrong, right? 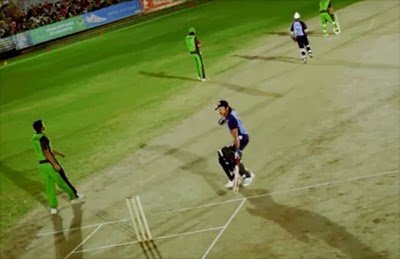 Although I'm not a big fan of watching sports, and I know nothing about cricket, the action scenes were suspenseful, fun and easy to follow. Rani Mukerji had a coach who taught her how to play cricket, and she practiced for months to make her performance believable. Additionally, she had to lose weight and get toned to achieve a cricketer's body. Her daily routine included 45 minutes of stair walking and 75 minutes of yoga. Then four days a week, she did 1 1/2 to 2 hours of cardio, weight training, stretches and hardcore stomach exercises. 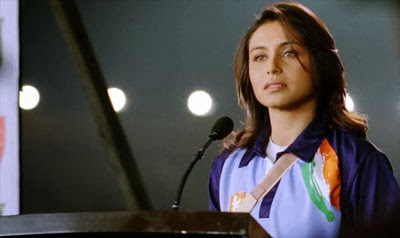 I like the fact that Veera is an advocate for women and spoke against discrimination in the film. In reality, Rani Mukerji is involved in several humanitarian causes and is said to be vocal about the issues faced by women and children.

The film also serves to celebrate India and provide an example of peace between India and Pakistan, showing both peoples unified in a supportive way.

Music Director, Pritam, did an amazing job on the music. The soundtrack really kept to the spirit of Hadippa, being energetic and catchy and inadvertently causing my shoulders to move on their own. The love song, Ishq Hi Hai Rab, has a softer more romantic sound which helped to step up the chemistry between Rohan and Veera.

The choreography is fun and fast paced, involving a large number of dancers, all moving in sync. It's pretty fascinating to watch. Not all Bollywood movies are the same in this respect; there are those where even the main cast isn't proficient in dancing. In Dil Bole Hadippa both leads are excellent dancers and I wasn't tempted even once to fast forward through the musical numbers.

The ending music video for Hadippa The Remix is worth watching. First, it's just fun, but there are lots of steamy shots of Shahid Kapoor and Rani Mukerji that are not to be missed! Fangirls and Fanboys alike will be happy many times over. 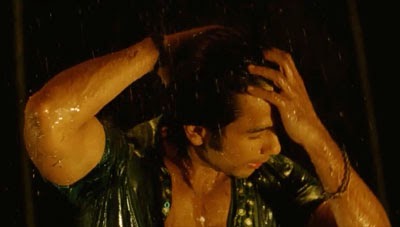