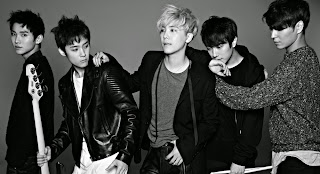 Several hours ago, via social networking sites, main vocalist of F.T. Island, Lee Hongki, reveals some awesome news for U.S. Primadonnas. An image of a message from FNC Entertainment unveils some U.S. stops for the group's [FTHX] Tour, in January of 2015.

More information about the tour and ticket sales have yet to be released.

EDIT: Tickets go on sale this Friday at 4PM via Powerhouse. Tickets range from 50-120 dollars each. $120 include early admission and high touch.

Christmas is quickly approaching and I think this is the perfect time to get your list in order and support this awesome group.

With the success of Hongki's drama, Modern Farmer, there is no doubt that this is the perfect time for such news. It'll definitely be a hit as well.