Nodame finishes performing a slapdash rendition of Etude and the audience is confused when she doesn't start her second piece. Nodame sits dazed until she spots Chiaki in the audience. She remembers Kaori's advice to think of the happiness of being in love. She begins to play L'isle Joyeuse beautifully, which doesn't please Yuuta who has been watching her with disdain.

Tsuboi, Eto's other pupil, gets into the finals along with Nodame and Yuuta. Nodame runs out to find Chiaki, but he's already left. He texts telling her that he will come to watch her in the final round.

Chiaki arrives at R.S-Oke's rehearsal to find members from the disbanded S-Oke begging to audition for him. He tells them that he'll hold auditions when a piece needs extra players and urges them to keep practicing. Ookouchi announces that they can join his orchestra right away; Ookouchi Mamoru's Special Orchestra abbreviated as O M S. He's interrupted when Kawano rushes in, knocking him to the floor.

Kawano asks Chiaki to change into the tux she brought so they can take promotional pictures for the Christmas concert. Kimura offers to change as well, but Kawano informs him that they're only using good looking members for the ad. His eyes roll back in his head as Tamaki and Hashimoto try to comfort him.

Masumi tells Kiyora that he passed the first stage in applying for the New Tokyo Philharmonic. Kiyora encourages him and hopes he can keep playing in R.S-Oke as well. She shares that her teacher praised her performance in their concert and is waiting for her to return to Vienna in the spring.

Mine arrives, ecstatic that their concert tickets are almost sold out. It's the second step in his dream for an everlasting orchestra. Kiyora tries to talk to him, but he runs off to tell Chiaki the good news.

Takahashi finds Chiaki as he's changing into his tux and asks to join the orchestra. He tells him that he won third place at last year's Buffon International Competition and just returned to Japan after studying in Paris. He says he's better than the current concert master, which infuriates Kiyora who had been eavesdropping with Mine the entire time.

Chikai contemplates Takahashi's credentials as he unbuttons his shirt. He stops and asks for his name again, but Takahashi who had been very focused on Chiaki undressing, has an outburst demanding that he take off his clothes already. Kiyora yells out to Masumi that Chiaki is in danger, and Masumi comes running. 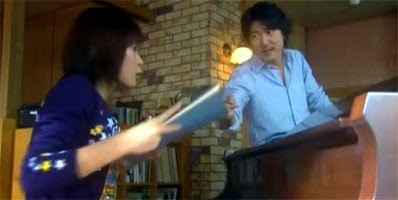 Eto gives Nodame Schumann's Piano Sonata No. 2 and Stravinsky's Petrouchka to learn for the finals. She only has two days which is not enough time to master both, so he chose difficult pieces to show off her technique.

Takahashi auditions and everyone is awed by his skill. When he's done, he asks Chiaki whether it's going to be him or Kiyora. He explains that he has an offer in show biz, but he would rather come to the orchestra, so he should at least be concert master.

Chiaki asks why he wants to join R.S-Oke. Takahashi gushes about how great the orchestra is. Everyone is skilled, young, confident, and they had fun at the concert. They sounded like love making and then there was the beautiful conductor giving himself into ecstasy, and men in tuxedos. He loves classical music, the orchestra and Chiaki. Everyone is taken aback,

Masumi says they already have a wonderful concert master and prepares to attack Takahashi. However, Mine steps forward to welcome him to R.S-Oke, saying he's touched by his enthusiasm. Though his performance isn't as powerful as Kiyora's, his meticulous technique and beautiful tones surpass her. Also, third at Buffon International versus second at nationals would sound better in promotions.

Mine tells Kiyora that she's free to return to Vienna. And if she wants to come back as concert master, to bring two or three titles above Takahashi; she can do it. He'll practice violin so hard that he won't have time to cheat on her. Chiaki is startled at that, and Masumi tells him that he's dense. Mine announces that he'll keep R.S-Oke going no matter how many members leave. 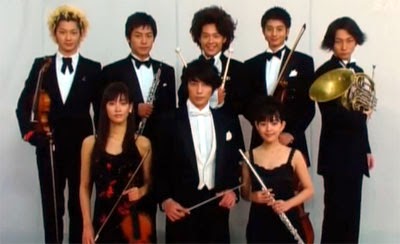 As the members pose for the promotional photos, Chiaki thinks to himself that Mine is right. The orchestra should keep evolving and not stagnate.

Takahashi finds Chiaki on his way home and expresses his desire to deepen their friendship by chatting until sunrise. He asks him where he lives. Masumi rushes over and detains Takahashi so Chiaki can escape. 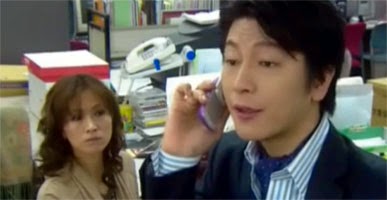 Chiaki decides he must do his part and calls Sakuma asking a favor for R.S-Oke. And he thinks of the one evolving at warp speed, Nodame.

Nodame is having trouble in practice. Kaori is alarmed that she's acting strange and not eating. She encourages her to eat, rest or get fresh air.

The status of the Maradona Competition is posted at school and everyone is surprised that Nodame got into the final round. Maki and Reina ask Eto if she can win. He tells them that he doesn't know if she can even get ready for the final round. Saiko takes notice.

Eto returns home and is surprised to find that Nodame has mastered Schumann's Pinao Sonata No. 2. He asks Kaori if someone came to teach her and Kaori tells him about the strange thing Nodame did with her hands. Eto can't understand Nodame. It was like with Schubert where she unexpectedly mastered a piece in a day. But she fell apart in competition playing a piece she aready knew well.

Eto is frustrated as Nodame plays the no good version again. He's never had a pupil like her and wonders how he should teach her. She abruptly slumps over and Eto calls Kaori for help.

Saiko visits Chiaki saying she had come to give Nodame a ticket to R.S-Oke's concert. She admits that she had wanted him to turn to her somehow, but Nodame is trying her best to catch up to him in order to walk at his side. It would be great if she did well in the finals. As she leaves, she remarks that it's Chiaki's last concert in Japan and tells him to work hard. Chiaki gets up and finds the Beethoven Symphony No. 7 score.

Nodame is in bed with a 38.8 fever. Kaori wonders if they should take her to the hospital. Eto thinks they should let her rest. He says that since she's always strange, he didn't notice anything was wrong. She was overdoing it by not eating.

Nodame dreams that she must jump through fiery hoops. She sees Yuuta and her old teacher, which transforms her into a scared little girl.

Since Nodame was not able to start working on Petrouchka, Eto explains it to her right before the competition as she listens to the CD. Stravinsky rearranged the orchestra ballet piece into a piano piece, It's a sad story about a puppeteer who gives life to a puppet who wants to become a real person. Nodame thinks it's like a festival in a lively toy land. She wants to listen to it one more time, but they're running late and Kaori drags her out the door.

Eto notices that Nodame hasn't given up. She studies the score intently on the bus ride to the venue. A ringtone of the theme to Today's Cooking suddenly disturbs her concentration.

Eto entreats Nodame to leave the stage after the first song. She was not able to practice Petrouchka at all and could be disqualified for not playing it correctly. Nodame says nothing, but continues to study the score.

Yuuta finds Nodame and tells her that their old teacher, Hanazakura, will be watching the finals. He says won't lose to her anymore. A prodigy is just a normal person after the age of 20. Nodame seems to descend into her childhood trauma.

The audience perks up when Yuuta takes the stage. He's the favorite to win and Chiaki notes that he's good, not making any mistakes. Auclair wonders who he's so afraid of.

Nodame comes out looking like Scarlett O'Hara. Everyone is impressed with her Schumann. Chiaki has never seen her play this way. Auclair urges her not to lose control; she's come here for something.

In spite of Eto's instructions not to play the second piece, Nodame starts Petrouchka. She plays well until she gets to the part where the ringtone had interrupted her studying. She pauses for several seconds before resuming again, though now incorporating the theme to Today's Cooking into the piece. The audience is quiet as she bows and hurries off the stage, until Mine shouts "Bravo!' and begins the applause. Auclair looks entertained while Chiaki is concerned as accuracy is necessary in competition.

Nodame leaves while the winners are announced. Yuuta earned second place, with no one placing first. Chiaki catches up to Nodame and asks her to come to Europe with him. If she's serious about piano, the school abroad would be better for her. He encourages her to see more, feel more, and experience more with him.

Nodame asks why she has to go to that extent to study. She tells Chiaki that she entered the competition just to win money to play around. She wonders why everyone says what they want, both now and in the past. She thinks about her childhood trauma with frustration. What's wrong with playing the piano freely and for fun? Chiaki asks if she had fun when she was on stage performing. Nodame says she didn't.

Chiaki says he understands and moves to leave. Then he tells Nodame that it was the first time he's seen her facing music so seriously. It was a good performance. He walks away and Nodame begins to cry. Even so, she didn't win.

Several days later, Mine bemoans the January exams. He had been so preoccupied with the concert that he didn't study. Kiyora reminds him that he's the one who wanted to have a Christmas concert. She offers to help him, but Mine doesn't want her making fun of his studies too. He asks Chiaki, who says he's busy. His father suggests getting help from Nodame. Mine wonders if she's still feeling down.

Chiaki retrieves the Beethoven score. Ever since that day, he reflects, not even the sound of the piano has come out of Nodame's apartment. Sakuma calls Chiaki about his request and tells him that he has a list of conductors who can replace him.

Chiaki decides he has to tell the orchestra that he's leaving. He arrives at practice and begins to announce the piece they will be playing, when everyone pulls out their Beethoven scores. He wonders how they knew and it's revealed that Mine told them awhile ago. It's the first piece he conducted with S-Oke. Mine says they should perform it perfectly and that it's Chiaki's last performance with R.S-Oke.

Chiaki is touched. He looks back at the empty chair normally inhabited by Nodame.

Nodame leaves her apartment in a somber mood.

Chiaki tells himself that it's fine. Nodame's issues have nothing to do with him. He steps forward and starts practice.