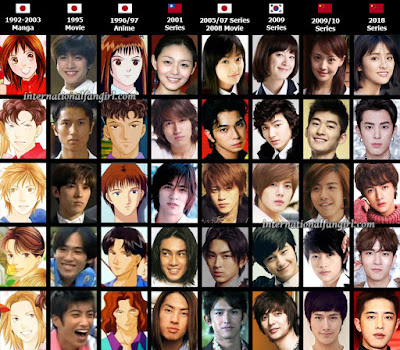 There's a new version of Boys Before Flowers in town (yes, we're pretending that the failed U.S. attempt of 2013 never happened) and it's a Chinese remake starring Shen Yue and Wang He Di.  The 2009/2010 series seemed more loosely based on the original story, while the current drama is sticking closely with the original premise.

The one glaring difference, though, is that the F4 is thoroughly de-clawed.  Keeping with the present day sensitivity toward bullying, the threat and menace of the F4 and their influence over the student body has been completely disarmed.

After the first episode, I found myself sympathizing with Dao Ming Si (Domyoji) and quite irritated with Dong Shan Cai's (Makino) rude, violent and aggressive behavior.  The production quality and casting seem to be good, but the script is lacking.  Not only is the main female lead unlikable, but there is no sense of tension, conflict or intrigue to the story.  Nothing is really at stake.  There are no wrongs that need to be righted.  Perhaps the characters will mature, but nothing in the first episode stirred any interest in me.  The only motivation I would have for continuing to watch is the fact that I've seen all the other versions, but I'm not sure it's enough at this point.
Posted by Panda at 12:12 AM