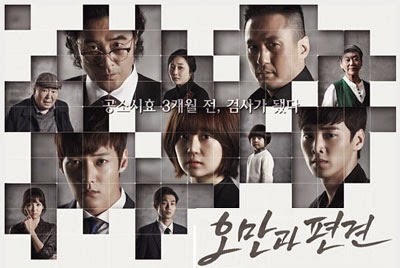 MBC's 21 episode legal romantic drama, Pride and Prejudice, is about a young prosecution team working to reveal a conspiracy that can crush them. It's really two stories intertwined, which are unraveled step-by-step in a suspenseful way, while love struggles to bloom.

Lead by Chief Moon (Choi Min Soo), the team's purpose is to investigate civilian concerns, but soon branches out to bigger cases despite opposition from their superiors. At first it seems that Chief Moon is simply being ambitious and desiring more prestige for the team, but as he guides the prosecutors toward connected cases, it becomes clear that he has another agenda.

Each prosecutor is paired with an investigator who they end up doing a lot of field work with, so they aren't always stuck in conferences or the interrogation rooms. They really seem more like detectives who don't rely much on the police. Work is also balanced with home life, as our main and second leading man and leading lady all board at the same house.

Han Yul Moo (Baek Jin Hee) is a new intern prosecutor whose motivation is revenge stemming from a family tragedy. She does an excellent job portraying confusion, conflict and resolve as she lets her pure heart lead her. She also has a complicated relationship with her depressed mother played by Kim Na Woon, who is dealing with their tragedy in a decidedly more self-destructive way. Baek Jin Hee won the Excellence Actress for Special Project award at the MBC Drama Awards.

Goo Dong Chi (Choi Jin Hyuk) is the prosecutor in charge of training Yul Moo, and they share a past that is more complicated than even they realize. He's charming, intelligent and excellent in a fight. Choi Jin Hyuk gives us an authoritative character tempered by a warm heart and sense of humor. At the MBC Drama Awards he won the Excellence Actor for Special Project award.

Goo Dong Chi as the older man who knows what he wants, and Han Yul Moo as the younger uncertain woman with strong convictions, do have a sweet chemistry. Their personal obstacles are overcome in a believable way, and their matching moral fortitude and bravery builds a strong bond.

Kang Soo (Lee Tae Hwan) is Goo Dong Chi's investigator and our endearing second leading man. He's rather shy, but courageous and protective. Orphaned at a young age, he doesn't remember the traumatic events of his past which happen to be relevant to the conspiracy his team is working to uncover.

Despite their rivalry in love, Dong Chi is still Kang Soo's idol and they share a touching bromance, made all the more adorable when a cute puppy is in the picture.

Chief Moon is volatile and mysterious. He knows the players and political shenanigans that go on among the officials above him. While it's apparent that he's supporting his team, it also seems that he's holding them back. It's hard to know whether he's trustworthy from one episode to the next. He shares a past with Jung Chang Gi (Son Chang Min) the neighborhood ahjussi who Kang Soo is close with.

Choi Min Soo gave a powerful performance as Chief Moon, winning him the Golden Acting Award at the 2014 MBC Drama Awards. He refused the award, indirectly referencing the Sewol ferry incident in a speech delivered by Baek Jin Hee that was suspiciously edited out of the program and included these thoughts:

"This is the least I can do for society's conscience and hope lost in the deep, cold sea during the times of a failing law, lack of common sense, and loss of any morsel of truth."

The other prosecutor on the team is the often cowardly Lee Jang Won (Choi Woo Shik). He's paired with investigator Yoo Kwang Mi (Jung Hye Sung) who is incidentally the daughter of Chief Moon's investigator, Yoo Dae Gi (Jang Hang Sun), which makes for some delightfully awkward scenes at the office.

The pair and their playful romance serves as comic relief, but they also do good work as Kwang Mi inspires Jang Won to do better.

While the drama is often serious and tense, it's tempered not only by comic relief, but cuteness too. The grandmother who adopted Kang Soo and runs the boarding house, takes on a new charge which stirs up the past for Kang Soo, and also gives us a chance to preview our handsome leads as daddies.

Pride and Prejudice is full of likeable complex characters in a tension packed story of intrigue. Impressively the pacing doesn't falter in the middle like it does in so many other dramas. Where it stumbles is at the end. The drama got a one episode extension which it did need as the time to resolve everything was getting short. Instead of utilizing that time wisely, episode 20 was filled with unnecessary flashbacks.

The courtroom scenes in the final episode bring us to an anticlimactic conclusion without any satisfying confrontation. There is a profound and touching sacrifice made that isn't acknowledged when we jump ahead three years. In fact there is no resolution for any of the characters, only a short extraneous scene involving the lead couple. Instead of using up so much time in flashbacks, a longer scene that gathered everyone together again at the end would have made for a much more gratifying finale.

In spite of the glaring flaws at the finish, Pride and Prejudice is worth watching. It will keep you guessing, trying to connect the dots, while commiserating with all of the lovable characters. Besides that, the concept that through teamwork and sacrifice, individuals can challenge corrupt powerful institutions to affect change is an important one to keep alive in society. In light of that, I have to applaud Choi Min Soo in his refusal of his award. Even though his message was censored on the television broadcast, the word still got out in the media and will hopefully provide some perspective for the masses. Read more about it here.