The Korean remake of Fated to Love You has certainly retained the spirit of the original. The one glaring difference fans of the Taiwanese version will notice is the change in the male lead's personality. While Ethan Ruan played a more serious iceberg, Jang Hyuk is flamboyant and dramatic. It's quite a twist, but it works, and helps to give this remake its own voice.

The story is about a man who keeps getting propositioned by male couples. Okay, not really, but there were a few scenes in the second episode that got my imagination going.

Lee Gun (Jang Hyuk) is an eccentric chaebol heir with great abs, which he so graciously displays repeatedly.  He's exaggerated, diva-ish, and you never know what he's going to do next. Having only seen Jang Hyuk in dramatic roles lately, I was delighted to see him perform such comedic antics. He's definitely upped his game from his past comedies.

Seeing that our leading man is getting older without securing an heir, the family puts considerable pressure on him and his grandmother, Chairwoman Wang (Park Won Sook), to get him married as soon as possible.

Kim Mi Young (Jang Na Ra) is the "Post-it Girl" played similarly by Chen Qiao En in the Taiwanese version. Too nice for her own good, she gets taken advantage of at the office where people pass work onto her via post-it notes.

Lee Gun and Mi Young's first meeting turns into something hilarious, with Lee Gun alternating between failing to be a gentleman, and going into chaebol mode. Mi Young is meek, but with an inner strength that briefly surfaces. This start to their relationship is a nice anticipatory appetizer.

Now if you've seen the Taiwanese version or read the synopsis of either, it's not spoilerish to say that these two end up having an accidental one night stand. Though much of the leading lady's forays into Imagination Land from the Taiwanese series are cut out, we still get the benefit of silly symbolism and animation in the Korean drama. Cheesy? Yes, but it fits right into place.

Though Lee Gun is an over the top type of guy, Jang Hyuk also brings subtley and tenderness to the role. Jang Na Ra is beautifully adorable as usual, and the two of them have a great rapport and undeniable chemistry. 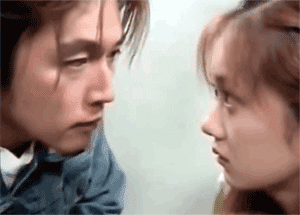 It doesn't hurt that they've already established themselves as an endearing couple in the 2002 rom/com, Successful Story of a Bright Girl. Since then, they've both enjoyed much success in their busy careers. Seeing them come back together as more refined and complex actors is amazing.

Choi Jin Hyuk is Daniel, and if the script sticks to the original where he's concerned, Daniel will be our sweet and caring Second Leading Man. We don't get to see very much of him in the first two episodes, but he seems like a pleasant scoundrel so far. Wang Ji Won is Kang Se Ra, Lee Gun's ballerina girlfriend who has been avoiding marriage due to her career. 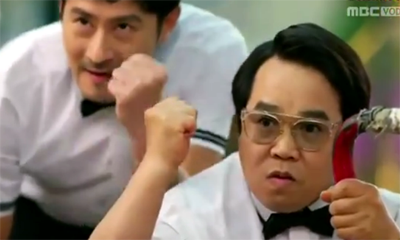 And then we have the men who are trying to stop Lee Gun from closing their soap factory and putting everyone out of work. Jung Eun Pyo and Im Hyung Joon make a perfect comedic duo as President Park and Mr. Choi (who also happens to be Mi Young's brother in law).

It took two episodes to tell the story that the Taiwanese version told in one. Being that there are 24 90-minute episodes in the Taiwanese series compared to 20 one hour installments in the Korean drama, I'm guessing that a lot of extraneous storyline and dragging action from the original will be pared away to create a more concise and satisfying story.
Posted by Panda at 1:17 PM